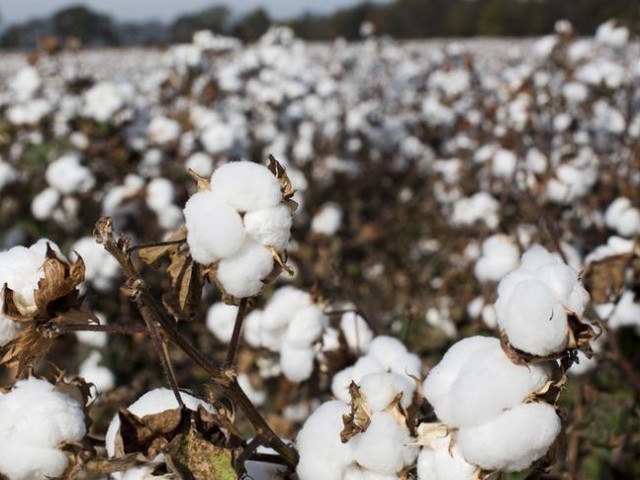 FAISALABAD: Agriculturalists and farmers are afraid that cotton production may decline further this year as the sector is plagued by wrong policies of federal and provincial governments.

Cotton production and area under cultivation is also falling primarily because growers have shifted to sowing sugarcane and wheat which guarantee minimum support price.

Government has set a target of 15 million bales of cotton for fiscal year 2019-20, which experts claim would be missed again.

Additionally, production of cotton has also endured a hit from pest attacks.

A few months ago, Prime Minister Imran Khan took notice of the declining cotton production and directed the agriculture department to resolve the issue. However, neither the provincial government of Punjab nor the federal government has done anything to improve the situation so far.

Punjab produces 65% of total cotton majority of which is produced in Southern Punjab. Both Bt and non-Bt cotton varieties are cultivated in Pakistan, however, the share of Bt cotton is 80%.

While talking to The Express Tribune, cotton experts said that situation of textile industries was worsening day-by-day due to lower availability of local produce due to which, the industry had to rely on imports.

“Textile mills had made deals in advance with ginners at relatively higher prices but actual price of cotton at the time of harvesting was less which resulted in losses for them,” Hameed Ahmad, an agriculture expert, told The Express Tribune. “On the other hand, cotton farmers had also taken advances from local ginners and middlemen and they also suffered losses due to low prices.”

Talking about crops of Sindh, he added that the cotton plantations were hit by swarms of locust pests which destroyed some of the produce.

The key reason behind 30% reduction in cotton output was continuous decline in area of cotton production, non-feasibility of good seeds, low returns and lack of awareness in farmers regarding cotton production.

“Farmers are not getting good average yield per acre,” an official in the Punjab Agriculture Department commented. “Agriculture department has fixed a quota of 2.85 million acre land for production of 15 million bales of cotton.”

The meeting would be chaired by Jahangir Tareen as well as progressive farmers.

In southern Punjab, Lodhran, Khanewal, Multan and Muzaffargarh are major cities of cotton production and in central Punjab, Faisalabad, Gujranwala and Sheikhupura are cotton producing areas.

“These insects damage the yield every season,” he lamented. “Every year, nearly four million bales are destroyed by pink bollworm and white fly.”

He added that low price and yield had forced growers to shift to maize and sugarcane crops.

According to him, this was the prime time for government to deal with falling cotton production.