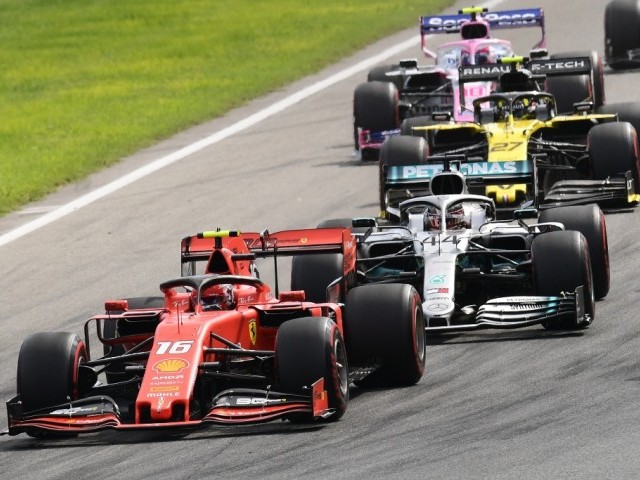 COMPLAINTS: Hamilton believes he was the victim of a controversial move during the Italian GP when triumphant Ferrari driver Charles Leclerc blocked him without leaving a car's width of space. PHOTO: AFP

MONZA: A disappointed Lewis Hamilton called for greater consistency and fairness from stewards’ decisions after missing out on winning Sunday’s Italian Grand Prix.

The series leader and defending five-time world champion believed he was the victim of a controversial move during the closely-fought race when triumphant Ferrari driver Charles Leclerc blocked him without leaving a car’s width of space.

The incident resulted in the victorious 21-year-old Monegasque driver being shown a black-and-white flag, signalling a caution but without a penalty.

Hamilton recalled similar incidents in past seasons have resulted in time penalties and suggested the current generation of younger drivers are being allowed to race under different rules.

In 2018, Max Verstappen was handed a time penalty for blocking Valtteri Bottas at the chicane in the Italian Grand Prix, in a move almost identical to that of Leclerc on Sunday.

“That’s just racing, I guess,” he said. “I had to avoid colliding with him a couple of times and that’s how it is, racing, today.”

Hamilton, who was within two seconds of Leclerc for most of the race, said earlier he did not want to talk about the incidents which he had said were dangerous.

“It doesn’t really matter what I think,” said the Briton. “I have nothing to say about it. It is pointless to bring it up. I had to avoid collisions and then I tried to race hard again and get back. This new generation get away with more than we did in the past. I’d just like to see consistency.”