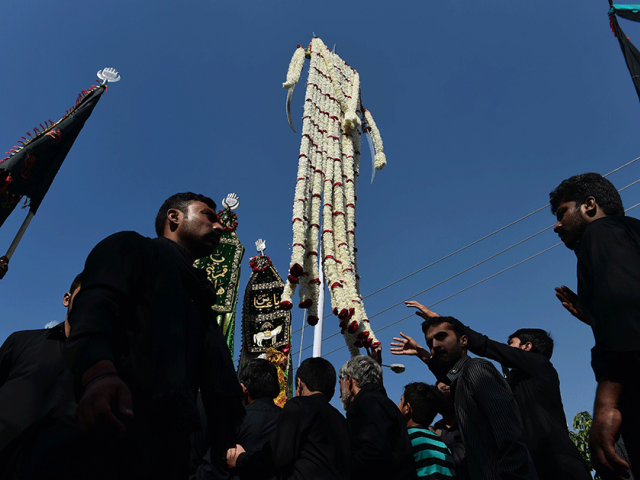 A Reuters file photo of Ashura processions in Islamabad.

QUETTA: Security remained tightened throughout 8th Moharram amidst various rallies and festivities in Quetta and its outskirts.

Security officials as well as traffic police kept monitoring the entry and exit passages of the city and inspected vehicles at various checkpoints and roundabouts. Light traffic vehicles including Suzuki cargo vans were especially screened for any possible bomb threat.

According to sources, security officials have been given a high alert to combat any untoward incident during the festivities of Moharram.

Uniformed officials have been deployed at strength at all entry and exit points of the city while plain-dressed officials have also been stationed to ensure foolproof security in the provincial capital.

Emergency declared at hospitals for Ashura

Balochistan Health Department has declared emergency in the hospitals on account of Ashura. Doctors and other staff members have also been instructed to show up or strict action will be taken in case of any absence.

All the necessary medicines have been made available in the Emergency, Trauma and other relevant wards.

According to the officials from Health Department, special measures have been taken to deal with any unfortunate event during Ashura.

On the directives of provincial health minister, steps have been taken to ensure availability of medicines in the hospitals along with the presence of doctors and staff members in case of emergency.

Activities will continue as per normal in all sections and departments of the hospitals. OPD will remain open for the public.

Any negligence by staff members in the wake of duty will be strictly dealt with.

Doctors have assured their cooperation in this regard.