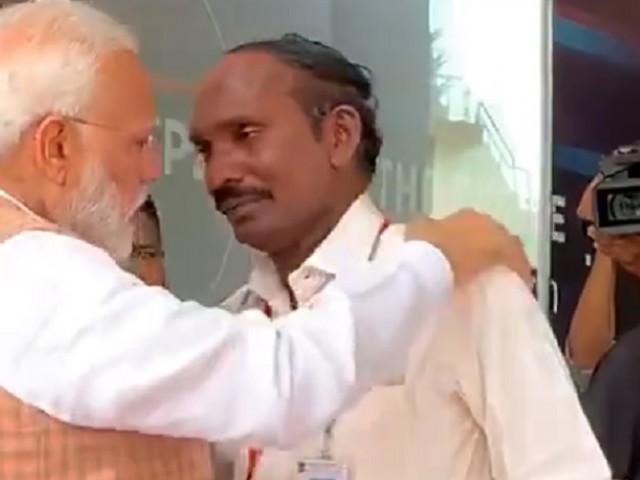 The spacecraft Vikram Lander of India’s Chandrayaan-2 lost communication with the ground station in the early hours of Saturday hours before it was due to land on the moon.

In a video now viral on social media, Indian Prime Minister Narendra Modi can be seen hugging and consoling a distraught K Sivan, the head scientist at ISRO, soon after the landing went awry.

The lunar lander of India’s Chandrayaan-2 moon mission was attempting a ‘soft’, or controlled, landing near the south pole of the moon where scientists believe there could be water ice.

Meanwhile, Minister for Science and Technology Fawad Chaudhry continued to bash India over its failed moon mission for a second day.

“Endia [India] only way now you can reach moon is through Bollywood. another 100 crore and you guys ll be on the moon.

Taking to Twitter on Sunday, he said the only way for India to reach the moon was through Bollywood. “Extremists always fail and you failed when instead of scientists you relied on Jotshi [fortune tellers] and delayed the mission,” wrote the minister.

Endia only way now you can reach moon is through Bollywood,another 100 crore and you guys ll be on the moon. on serious note extremists always fail and you failed when instead of scientists you relied on Jotshi and delayed the mission,Come out of hatred for other communities.

He said India was adding to the existing space debris, while reminding his followers that this was not India’s first failed mission to the moon.

Endia is adding into space debris, ealrier“Mission Shakti”failed and now “Chandrayaan”, irresponsible attitude of #ModiSarkar from region to space is disastrous for the world,Galaxyies and the planet is a delicate business politicians must not be allowed to play foolish gimmicky

He deemed Modi’s attitude ‘irresponsible’ and said his policies are disastrous for the region and the world.

Chaudhry said space exploration was a serious venture and should not be used for political gimmicks.