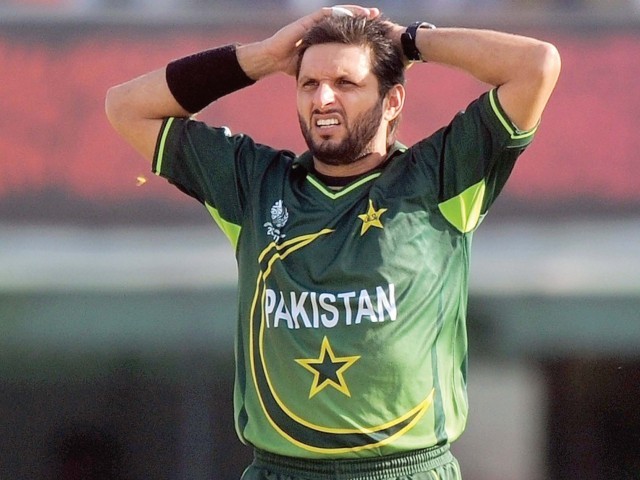 The PCB Chairman Ijaz Butt has blamed the ODI losses against the West Indies on Shahid Afridi and also accused the all-rounder of politicising the issue. PHOTO: AFP

The Pakistan Cricket Board (PCB) Chairman Ijaz Butt has closed the captaincy doors on Shahid Afridi, saying the all-rounder will never lead the national team again.

Butt also blamed him for the two One-Day International (ODI) losses suffered against West Indies during the Caribbean tour in May this year.

“In my opinion, perhaps considered wrong by some people, he made us lose the fourth and fifth ODIs,” Butt said in an interview.

“As far as I am concerned he is not captaincy material for the PCB anymore.”

Afridi was removed as captain after the West Indies tour followed by a retirement announcement by the all-rounder where he also criticised the board’s set-up and selection processes. Afridi also said that he will not play for Pakistan under the current management.

The PCB, in return, revoked Afridi’s No Objection Certificates (NOC) to play in foreign leagues and suspended his central contract while also directing him to appear before a board’s disciplinary committee. However, the 31-year-old challenged the sanctions in court.

The dispute was resolved after an out-of-court settlement where Afridi got his NOCs reinstated but appeared before the PCB disciplinary committee that fined him Rs4.5 million.

Asked if Afridi would be allowed back on the team, Butt said, “He has not given us his retirement. If he wants to resign, he has to resign with the PCB.

“He is no more on our contract list of players… after the West Indies tour he was no more the captain as our policy was to appoint a captain after every series and he knew that,” said Butt.

Butt accused Afridi of politicising the row against the PCB and its management, saying he had to fend off calls from former Pakistani prime minister Nawaz Sharif and the governor of the Afridi’s home province of Sindh, Ishrat-ul-Ibaad.

“I told them point blank that I will not budge and Afridi will have to appear before the disciplinary committee,” said Butt.

Butt said leg-spinner Danish Kaneria had not been cleared to play because he is not speaking the truth.

“He is involved in certain things, which unless he clarifies himself, and he has not done so far, he will not be considered,” said Butt.

“We have a former Supreme Court judge in the integrity committee and he said that Malik is not speaking truth.

“If he speaks the truth and he’s cleared he can walk in the team as we need him in ODIs,” said Butt.

Meanwhile, Butt added that India rejected a proposal to share revenue from a possible series between the archrivals on the grounds that India will play host.

“We hope the series will be revived and we told them we are ready to play in India but revenue should be shared equally, but they did not accept the proposal,” Butt said in an interview broadcast late Thursday.

Pakistan are slated to tour India next February and March in the International Cricket Council (ICC) Future Tours Programme, subject to clearance from both governments.