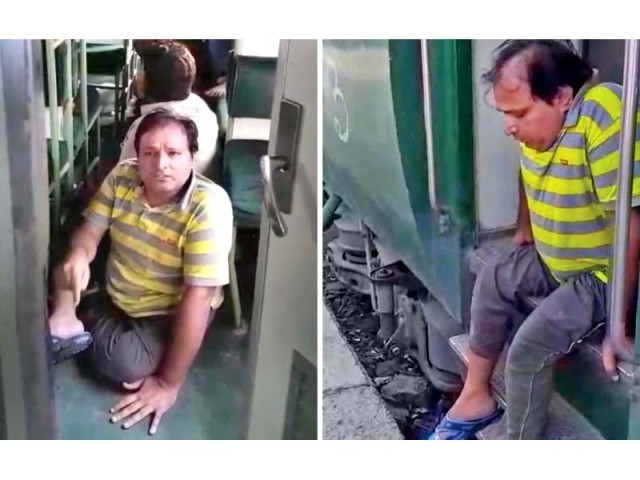 MULTAN: Despite tall claims, the Federal Minister for Railways’ plans to provide facilities to differently-abled persons have not yet materialised.

A polio victim, Nadir Khan, was travelling along with other differently-abled companions when he decided to make a video of the traumatic hassle he encountered on a train trip. The victim then uploaded the video on social media.

According to details obtained by The Express Tribune, Nadir Khan, a polio victim and resident of Multan, travelled to Rawalpindi in Mehr Express with the Mainstream Association of Disabled People from Multan Cantt Station, a few days ago. The group returned to Multan via said passenger train, yesterday.

Reportedly, during the journey, the differently-abled people were in distress due to a lack of facilities at the train station.

Federal Minister for Railways Sheikh Rashid Ahmad was criticised on social media after the video went viral. In this regard, Nadir said that the federal minister had promised, in December 2018, that facilities will be provided to differently-abled people within six months.

Nine months later, the railway’s ministry appears to be helpless in providing the much needed facilities. The polio victim added that on the railway station, in order to move from one platform to another, passengers have to cross the railway track. “No bridge was built for the differently-abled, which could have helped us cross the tracks and move to the other side. There are few facilities at Rawalpindi station but when you want to use them, there is no one available for us.”

The differently-abled passenger added that if any passenger called at the given number for assistance, no one receives the call. “The ignorance towards us is to the extent that no one attends us even when the bell is rung.”

Nadir further said that the width of the bogie’s door is much lower for a wheelchair passenger to fit through the door easily. “Moreover, we have to bring our own wheelchair to move from the train station all the way to the seat. There is no washroom in the train that can accommodate people with disabilities.”

Nadir maintained that the duration of train journeys often exceeds 24 hours and it is nearly impossible for any passenger to go without food or toilet facility.  “People make videos on social issues not just for the sake of criticism but to spread awareness so that people understand the gravity of the situation.”

Nadir appealed to the authorities concerned to allocate at least one bogie of every train for differently-abled passengers and facilitate the movement of said passengers during their stay at the train station.

Facts forged in FIR against ASI