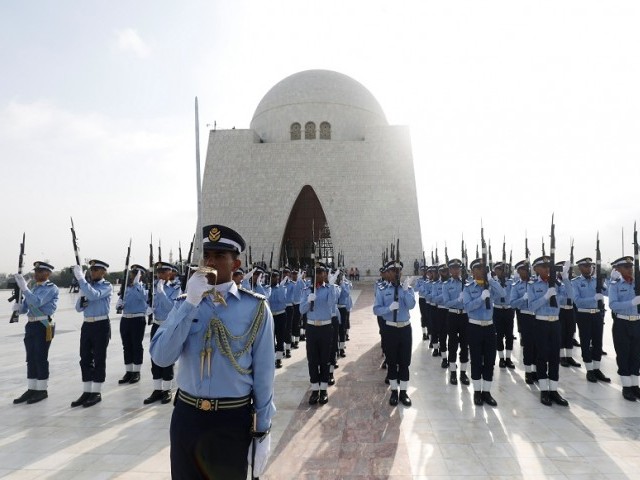 Members of the Pakistan Air Force change their positions at the mausoleum of Muhammad Ali Jinnah during the Defence Day ceremonies, or Pakistan's Memorial Day, to express solidarity with the people of Kashmir in Karachi. PHOTO: Reuters

ISLAMABAD / RAWALPINDI / LAHORE / KARACHI: As the nation commemorates its 54th Defence Day on Friday, government officials and political leaders visited the homes of martyrs across the country to pay respects to their families and honour their supreme sacrifice for Pakistan.

In Islamabad, Foreign Minister Shah Mehmood Qureshi visited the family of Shaheed Captain Junaid Abbasi, who was martyred in September 2018 during an operation in North Waziristan.

“We laud the exemplary bravery of Shaheed Captain Junaid and the thousands others who have laid down their lives in defence of their motherland. We also salute the courage and resolve of the mothers, fathers and families of our martyrs,” Qureshi said in a talk with reporters outside the residence.

He said Pakistan and its people owe their security to the martyrs and urged the nation to respect Prime Minister Imran Khan’s request to reach out to their families on Defence Day.

“On this day, we also honour the sacrifices of thousands of Kashmiris who have valiantly faced the brutalities of India’s occupying forces. We also salute the strength and resilience of Kashmiris in who are living under barbaric conditions created by India for the past 33 days,” said Qureshi.

Reiterating Pakistan’s unwavering support for Kashmir and its people, he announced that Prime Minister Imran Khan will be visiting the Line of Control (LoC) on Friday to commemorate Defence Day with the soldiers defending Pakistan’s borders.

Also in Islamabad, National Assembly Speaker Asad Qaiser visited the house of Shaheed Colonel Sher Khan. He said the armed forces and citizens of Pakistan were ready and willing to face any enemy.

He reiterated Pakistan’s resolve to ensure that the Kashmiri people acquire their right to self-determination.

“The martyrs and their families are our pride and national assets,” she said in a media talk after the visit. “Their sacrifices will never be forgotten. They will live on in the nation’s memory forever.”

She also spoke about Pakistan’s resolve to support the Kashmir cause.

“We will continue to plead the case of Kashmir at every forum until Kashmiris are granted the right to self-determination,” said Firdous.

Former Pakistan cricket captain Shahid Afridi was also among those out to pay respects to the country’s martyrs. He visited the family of Shaheed Marium Mukhtiar, who is the first female combat pilot of Pakistan to be martyred in the line of duty.

“Defence Day is a special day for all Pakistanis. I marked the day with a visit to PAF Pilot Shaheed Marium Mukhtiar’s home. May Allah bless her soul, it was an amazing experience to hear about her bravery and courage, she will always be remembered. Pakistan Zindabad!” Afridi wrote in an Instagram post.

Defence Day is a special day for all Pakistanis. I marked the day with a visit to PAF Pilot Shaheed Marium Mukhtiar's home. May Allah bless her soul, it was an amazing experience to hear about her bravery and courage, she will always be remembered. Pakistan Zindabad!

Over in Punjab, Leader of the Opposition in the National Assembly Shehbaz Sharif paid his respects at the residence of Shaheed Lance Naik Taimoor Aslam. 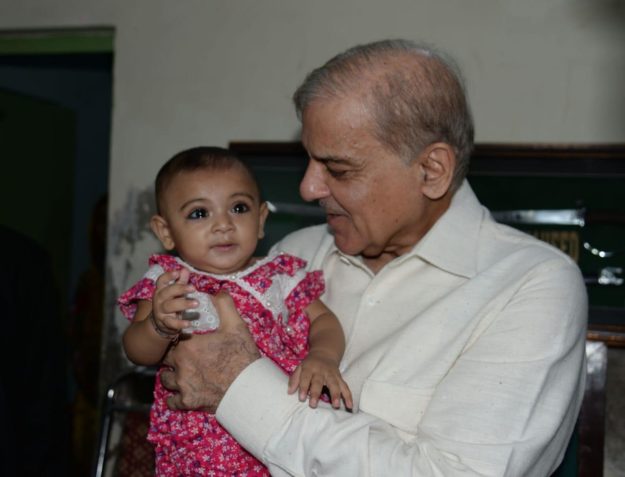