We are already in a state of war: AJK president

We are already in a state of war: AJK president

Masood claims India has been planni­ng the move for past five years
By ​ Our Correspondent
Published: September 6, 2019
Tweet Email 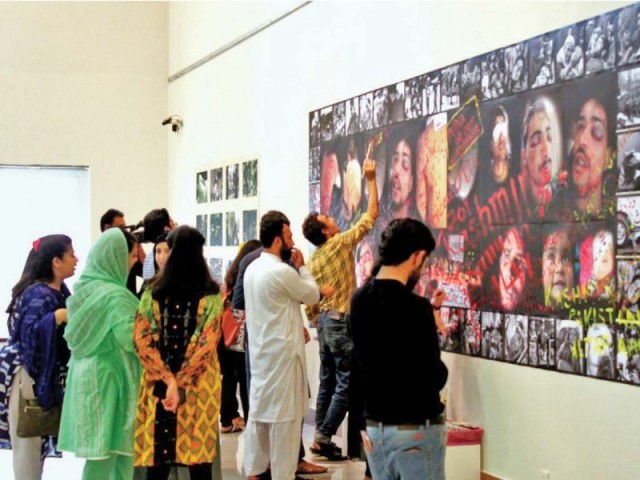 ISLAMABAD: Even as the top brass of the country assured that no quarter will be given in the event war breaks out between the two neighbouring but hostile, nuclear-tipped nations of Pakistan and India, the president of the Himalayan territory of Azad Jammu and Kashmir said that people in the divided valley believe they are “already in a state of war.”

Azad Jammu and Kashmir (AJK) President Sardar Masood Khan was addressing a conference on “Kashmir: Heaven in Ashes” in the federal capital on Thursday. The conference had been organised by the Centre for Global and Strategic Studies (CGSS).

“People are talking about the war in the future tense,” Masood said, adding that the reality was quite different for those who were living it every day.

“India has declared war against Pakistan in the form of proxies, it has sponsored terrorist attacks in all parts of the country,” he asserted.

The AJK president further stated that there is an impression that Pakistan always seeks a negotiated resolution over the Kashmir issue through diplomatic and political means. But the reality is that the two countries have been involved in multiple military conflicts to liberate the disputed territory of Jammu and Kashmir, he said.

The people have forgotten because of distortions in history, he said, adding that the first of these conflicts came immediately after it had gained independence from the British.

“If we could do it [attain military and diplomatic victory] then (1948), we can do it now,” Masood said.

Masood, who previously served as an envoy of Pakistan, argued that the August 5 revocation of Indian Occupied Kashmir’s (IOK) special status was not a sudden development.

“India has been preparing this sanction for the last five years,” he claimed, adding that Article 370 and 35-A are evil pacts which have deprived the Kashmiri people of their basic human rights. “India has an elaborate plan to colonise the disputed Himalayan territory by bifurcating it against the will of the Kashmiri people and eroding their right to a potential future,” he added.

The AJK president said that Pakistan was able to address its concerns over Kashmir at the United Nations Security Council (UNSC) with China’s help.

And now, even the international media was supporting the stance of the people of IOK and Pakistan.

It is the fundamental responsibility of UNSC to intervene in IOK to relieve the people from the humanitarian crisis they were suffering, he suggested.

“India will only respond either to military pressure or international diplomatic pressure,” the AJK president added.

The Kashmir struggle has inspired poets, painters and writers to produce creative works expressing through words, images and symbol their solidarity with these brave freedom fighters who wish to assert their human dignity and win acceptance for their fundamental right to life and liberty. This was said by First Lady Samina Alvi on Thursday while inaugurating an exhibition of paintings and photographs on “Paradise Stolen”. The exhibition has been arranged by the Pakistan National Council of the Arts (PNCA) at the National Art Gallery.