Says not afraid of arrest and would devise strate­gy accord­ing to situat­ion
By Rizwan Ghilzai
Published: September 5, 2019
Tweet Email 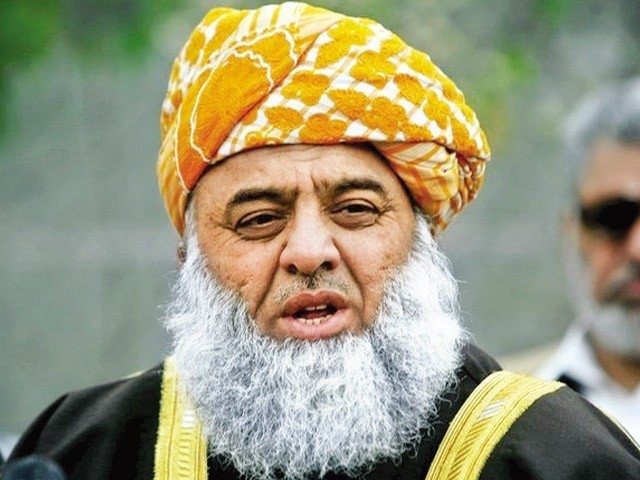 Commenting on the reversal of Gas Infrastructure Development Cess (GIDC) ordinance, the JUI-F chief commented that the withdrawal was of no use as ‘opportunists’ had taken advantage of it.

He said that ordinance was a law but the rescinding ordinance had no value as the ‘fake’ prime minister had shown the bigwigs the way to court and now the ‘drama’ should come to an end.

He lauded the statement of DG ISPR Major General Asif Ghafoor to not recognise Israel and fight for Kashmir till the last bullet saying that it had elevated the spirits of the people.

Speaking to media during a press conference in Islamabad, Rehman said that the central committee of JUI-F on September 18 would formally announce holding of freedom march in Islamabad in October.

He told the journalists that a meeting of JUI-F core committee was held in which the coordination committees were formed.The senior politician said that he was getting positive feedback from the people about the march as everyone wanted to get ‘rid’ of the ‘incompetent’ government.

Rehman said that Capt (retd) Safdar had conveyed him the message of Nawaz Sharif and in October, PML-N would support JUI-F in the freedom march. He hoped that the opposition would also join hands with his party.

The JUI-F chief said that he was not afraid of arrest and would devise strategy according to the situation.

Rehman said that all the options including resigning from assemblies were on the table and added that the situation in parliament still needed attention.

Rehman noted like the rumours of deal by Nawaz Sharif had died, and likewise, tales of deals of other parties would also die.

He said that Akram Durrani would be the chairman of rabta committee for coordination with political parties, Jalaluddin Advocate with ambassadors, Aslam Ghori with media, Haji Ghulam Ali with chambers of commerce and traders, Kamran Murtaza with civil society and Khawaja Mudassir Sulemani with ulema.