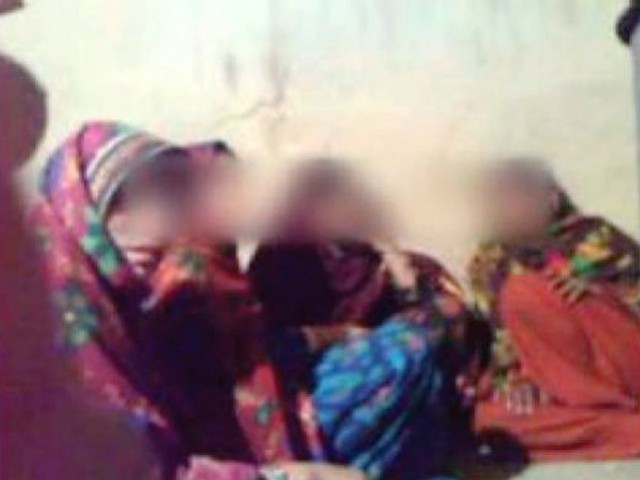 A screengrab from the video. PHOTO: FILE

ABBOTTABAD: A Sessions Court in Basham has sentenced three men to life in prison for the murder of women filmed enjoying themselves at a wedding, in a notorious years-old case that spotlighted so-called “honour killings”.

The case in the mountainous northern region of Kohistan has attracted international attention since it first emerged in 2012, when a local cleric was accused of ordering the deaths of male and female guests filmed at a wedding.

Three of the women in the video were murdered, district public prosecutor Attaullah said.

Those convicted included Umar Khan, the brother of one murdered woman, and Saier Khan and Sabeer Khan, fathers of the other two, he said.

“The court awarded life imprisonment to three men each for murder, while five others were acquitted,” he said.

The defendants’ lawyer Sarfaraz Khan said they would fight the decision in a higher court.

The 2012 video showed the women clapping as a man danced in the deeply conservative mountainous area of Kohistan, 175 kilometres (110 miles) north of the capital Islamabad.

Men and women had allegedly been in the room together, in defiance of the patriarchal notion of “honour” at the heart of strict tribal customs that separate men and women at weddings — though the video does not show them together.

Women have been shot, stabbed, stoned, set alight and strangled for bringing “shame” on their families for everything from refusing marriage proposals to wedding the “wrong” man and helping friends elope.

Men can be victims too, though it is rarer. A relative of those in the video, Afzal Kohistani, claimed the women in the video had been killed and took the rare step of pushing the case before the media and the justice system.

The Supreme Court investigated, but a fact-finding team met women who were purportedly those shown in the video and ruled they were alive.

One of the members of the fact-finding team, activist Farzana Bari, said she had long disagreed with the decision, fearing the women the team met were imposters.

Kohistani also insisted that the women shown to the officials were imposters, and that the death sentences were carried out.

In March this year he was gunned down in the northwestern city of Abbottabad, igniting fury from activists who praised him as a rare example of a man seeking justice in a so-called “honour” killing.

Three more men — Kohistani’s brothers — were later killed by a rival family. A Pakistani court convicted six of their killers in 2014, but their sentence was later overturned.