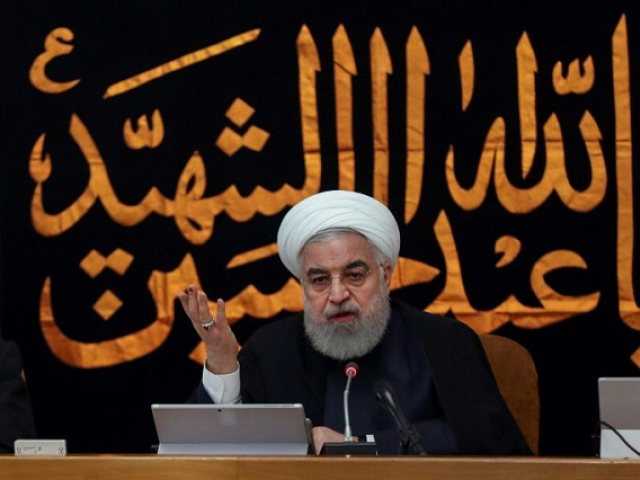 Iran's President Hassan Rouhani says he does not believe European governments attempting to rescue a 2015 nuclear deal will be able to deliver enough relief from reimposed US sanctions for Iran to delay annnouncing new cuts to its own commitments. PHOTO: AFP

TEHRAN: Iran’s President Hassan Rouhani on Wednesday ordered all limits on nuclear research and development to be lifted, the country’s third step in scaling down its commitments to a 2015 deal with world powers.

His announcement came shortly after the US hit the Islamic Republic with further sanctions, the latest in a series of punitive measures including an embargo on Iranian oil exports.

Iran and three European countries – Britain, France and Germany – have been engaged in talks to reduce tensions and save the nuclear deal that has been unravelling since US President Donald Trump withdrew from it in May last year.

But late on Wednesday, Rouhani made good on a declared intention to take another step away from the multilateral deal signed with the permanent five United Nations Security Council powers and Germany (P5+1).

“I, as of now, announce the third step,” he said on state television.

He referred to “expansions in the field of research and development, centrifuges, different types of new centrifuges, and whatever we need for enrichment”.

Iran in July abandoned two other nuclear commitments: to keep its stockpile of enriched uranium below 300-kilogrammes, and a 3.67-percent cap on the purity of its uranium stocks.

Rouhani had earlier on Wednesday told a cabinet meeting: “I don’t think that… we will reach a deal”.

But the Iranian president had also said Tehran and the European powers had been getting closer to an agreement on a way to resolve burning issues.

“If we had 20 issues of disagreement with the Europeans in the past, today there are three issues,” he said.

French President Emmanuel Macron, meeting Trump last month in France, encouraged him to offer economic incentives for Tehran and dangled the possibility of a summit between the US and Iranian presidents.

Trump made clear on Wednesday that he was still interested in meeting Rouhani when the Iranian leader visits New York for the annual UN General Assembly.

“Sure, anything is possible,” Trump told reporters.

But Rouhani has already ruled out a summit without sanctions relief, and on Wednesday the Trump administration issued its third set of sanctions on Iran in less than a week.

In the latest salvo, the Treasury Department put on its blacklist a shipping network of 16 entities, 10 people and 11 vessels that it said was selling oil on behalf of Iran’s elite Revolutionary Guards’ Qods Force.

The network sold more than $500 million worth of oil this spring, mostly to Syria, benefitting both President Bashar al-Assad and militant Lebanese allies Hezbollah, the Treasury Department said.

A US official said that the move showed Washington’s position on relaxing sanctions – and warned that more would come.

“We can’t make it any more clear that we are committed to this campaign of maximum pressure and we are not looking to grant any exceptions or waivers,” Brian Hook, the State Department coordinator on Iran, told reporters.

Iran has said it will resume full compliance with the nuclear deal if it reaches a deal with France on a $15-billion credit line, which Tehran would repay once it resumes oil exports.

The US is currently trying to block such shipments with unilateral sanctions.

Hook stopped short of criticising the credit line itself, saying there was no “concrete” proposal.

Speaking days after a trip to France, deputy foreign minister Abbas Araghchi ruled out renegotiation of the 2015 accord, known as the Joint Comprehensive Plan of Action (JCPOA).

“Returning to full implementation of the JCPOA is subject to receiving $15 billion over a period of four months, otherwise the process of Iran reducing its commitments will continue,” said Araghchi, quoted by the state news agency IRNA.

Hawks in the Trump administration adamantly oppose any easing of pressure, saying their goal is not only to contain Iran’s nuclear programme but to curb the clerical state’s influence across the Middle East.

Iran had long threatened to carry out a third set of nuclear countermeasures by Friday unless other parties to the deal offset the effect of US sanctions in return for its continued compliance.

Tensions rose significantly in July since Iran took the first two steps away from the nuclear deal and seized a British-flagged tanker – the Stena Impero – in the Strait of Hormuz for “failing to respect international maritime rules”.

But some members of the crew of this Swedish-owned tanker have been released, Stockholm said late on Wednesday.

“A part of the crew of the Stena Impero… has been released,” Sweden’s foreign ministry said in a message to AFP, without giving details of how many of the crew had been freed.