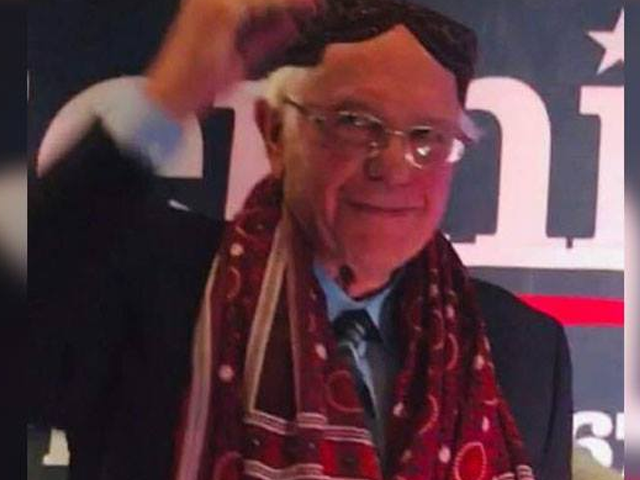 In a popular video on social media, the US presidential candidate Bernie Sanders dons a Sindhi Topi and Ajrak, presented to him by a Pakistani man.

Sanders received the honour amidst his campaign at Houston. Given that the Vermont Senator had earlier spoken against the situation in Indian-occupied Kashmir, it was a gesture in recognition of his statements for the Himalayan terrain.

He called India to lift the curfew and restore communication in Kashmir, suggesting that social isolation has caused severe damage to the territory. He also condemned New Delhi’s actions, calling the administration’s decision ‘unacceptable’ while urging the US government to intervene in IoK and ensure the implementation of international law and UN resolutions.

"India’s action [in Kashmir] is unacceptable and the communications blockade must be lifted immediately, and the US government must be speak out boldly in support of international humanitarian live and in support of a UN backed peaceful resolution" @BernieSanders #isnacon pic.twitter.com/PrvgYzfqPs

“I am deeply concerned about this situation in Kashmir where the Indian government has revoked Kashmiri autonomy, cracked on dissent and instituted a communications blackout. The crackdown in the name of “security” also denies the Kashmiri people access to medical care,”

Sanders expressed severe disappointment towards the Indian oppression and called out the matter to be a breach of human rights. He humbly accepted the honour bestowed in the form of a block-printed shawl and Sindhi cap as he shook hands with the Pakistani gentlemen with a smile on his face.