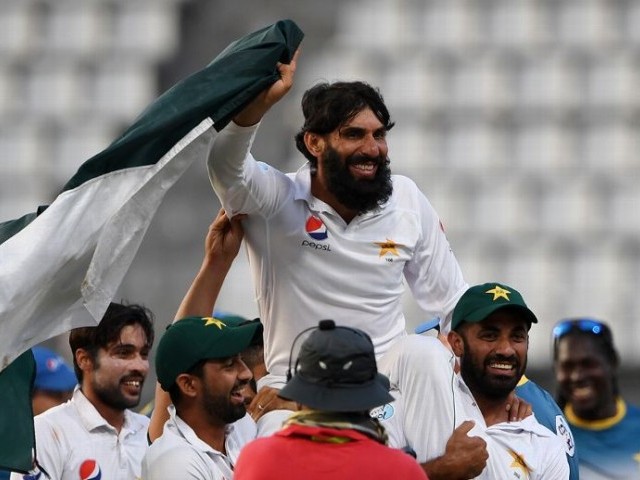 HUGE RESPONSIBILITY: The PCB has appointed Misbah as the head coach and chief selector which means he will have to deliver on not one but two fronts. PHOTO: AFP

Misbahul Haq is a magician. In his playing days, he would hold the fort for Pakistan when everyone else in the batting lineup would fail. He was the walking and talking manifestation of optimism. Even if everything was lost, he would still not stop trying.

Right now, the circumstances are once again tailor made for him. Pakistan cricket team has lost (read fired) all of its management and the Pakistan Cricket Board has called the veteran to save the day for them.

Usually, when the PCB appoints a new person in the team management, a lot of questions are raised about if the person will be able to take the Pakistan team one step forward.

Waqar Younis was asked this question and then Mickey Arthur was also inquired about the same thing in the head coach position, but with Misbah in the role, that question takes a back seat.

Misbah will deliver as the head coach, period.

Why? Because Pakistan’s current lineup of players is struggling in Tests and ODIs and there is no man who understands the formats the players better than the former right-handed batsman. He will be successful not only because he has played with some of the players and has a respectful relation with them while knowing their strengths and weaknesses, but also because he has led them to some great feats: first-ever Test series win in West Indies and rise to the number one position in Tests to name a few.

Also, questions about Misbah’s defensive approach when he was the captain of the sides will be raised and tons of literature will be churned out about it, but with the current crop of players who are young and always raring to go, the former skipper of the Pakistan team will be able to take risks that he couldn’t in his time as the captain.

If he has the skill or not to be chief selector is not a relevant question at the moment, instead the right thing to ask is that how will he be able to kill two birds with one stone?

During the domestic season, where some part of it overlaps with the senior team’s series, will he go out head-hunting or will he give time to the first-team players during conditioning and preparation camps.

There might not be any conflict of interest in the two jobs that Misbah has been given, of preparing the senior team for series and also to lead the team which will scout for new and upcoming talent and announce squads, but the responsibility is massive.

While Arthur and former chief selector Inzamamul Haq both failed in their jobs individually, which should be the only reason they were fired from their posts, Misbah has been asked to rectify all the mistakes made by them. One again he has been asked to deliver when everyone else has failed.

Also, legendary pacer Waqar Younis has been appointed as the bowling coach, one of the best decisions PCB has ever taken.