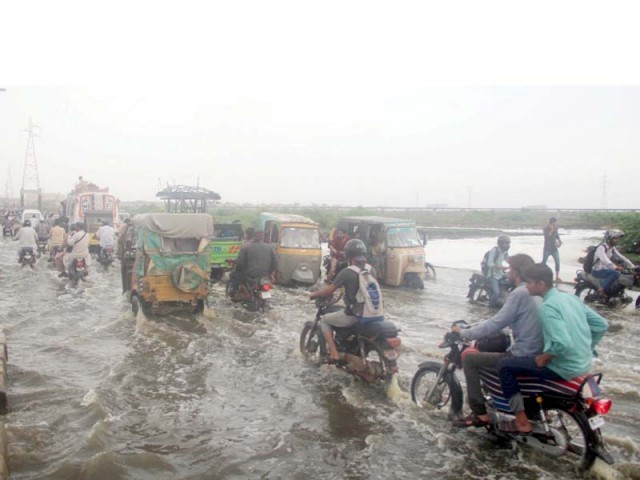 Rainwater inundates the city’s roads and thoroughfares as monsoon rains continue to lash the port city. The Met department has forecast at least two more spells of rain to hit the city before the end of the month. PHOTO: ONLINE

KARACHI: As commuters spent hours on the city’s roads, braving the heavy rains from above and the knee-deep water below, the Pakistan Meteorological Department predicted more rains to hit the city today (Tuesday).

On Monday, though the port city received heavy to moderate rains in several parts, major thoroughfares of the city choked as the drainage system failed to handle the incoming rainwater. At least 18 millimetres of rainfall was recorded in Landhi, while 13mm was recorded in Faisal Base, 10mm in Saddar, 6.8mm at University Road, 5mm at Old Airport and 1.6mm at the Jinnah International Airport. Moderate showers were recorded in other parts of the city.

PMD officials said that various areas of the city are likely to receive more rains, adding that hot weather and humidity was in place. PMD official Sardar Sarfaraz said that a new low pressure system of winds has built up in the Arabian Sea and India’s Rann of Kutch.

He said that there were chances of another low pressure of air being developed in the next 24 hours in the Bay of Bengal which will travel from Indian states of Gujarat and Rajasthan to Tharparkar in Sindh, before moving to Karachi.

Sarfaraz said that the monsoon season in Sindh started late, adding that the rains will continue to hit the province till September 30. He predicted at least two more spells of rains in the city this month.

Meanwhile, rainwater mixed with sewerage water has accumulated on the roads leading to extremely poor conditions. People have to wade through stagnant water filled with dirt and filth. In Surjani Town Sector 4, 6B accumulated rainwater has been hindering the movement of vehicles while the sewerage system in various areas of Korangi has also collapsed. The roads from Chakra Goth to the Coast Guard are also submerged in sewerage and rainwater.

In Ahsanabad citizens are removing water from the streets on their own as the sewerage system has broken down in their area. There is up to two feet water accumulated on the streets and with the administration not playing its part citizens are attempting to clear the water through trolleys and other equipment.

Residents lament that their neighbourhood has become unlivable with the garbage collected in the area while the pungent smell has made their lives miserable. A similar situation can be seen in Saddar with water accumulated outside Saddar’s central business market. Besides, accumulated sewerage water has also affected lives of residents of Gulshan-e-Iqbal, Orangi Town, Landhi, North Karachi, Mahmoodabad and other areas. Sources say that there is no proper system to drain rainwater which is why sewerage water mixes with rainwater. They claim that the issue will not be resolved till the two systems are separated.

Meanwhile, the rain has left major thoroughfares of the city as well as smaller roads in various localities in a dilapidated condition with potholes and craters. The monsoon rains over the city in the past month have left the city crumbling.

The tall claims of provincial government and local administration have come tumbling down as wear and tear can be seen on University Road. Similarly, potholes punctuate various points on the Korangi Expressway, National Stadium Flyover, roads in Orangi Town and SITE Federal B Area Industrial Zones. Shershah Suri Road in North Nazimabad is no more motorable at various places, especially at KDA Chowrangi.

Monsoon plantation drive: IMC to plant 300,000 trees around the city

Streets of Korangi stream and Link Road have also been left in an abysmal condition. This has been affecting the flow of traffic. There was traffic clogging at the flyover at Punjab Chowrangi and Nursery Road on Monday while streets in Liaquatabad Number 10 and Ghareebabad are also in poor condition.

The roads near Nagan Chowrangi, Five Star Chowrangi and Sakhi Hassan are in the same condition.

Besides thoroughfares, streets in different localities also bear the marks of the recent rains. Around 90% of the streets in Korangi district have potholes in them which have made the area more accident- prone, especially at night.

Karachi coastline to be placed under CDA jurisdiction