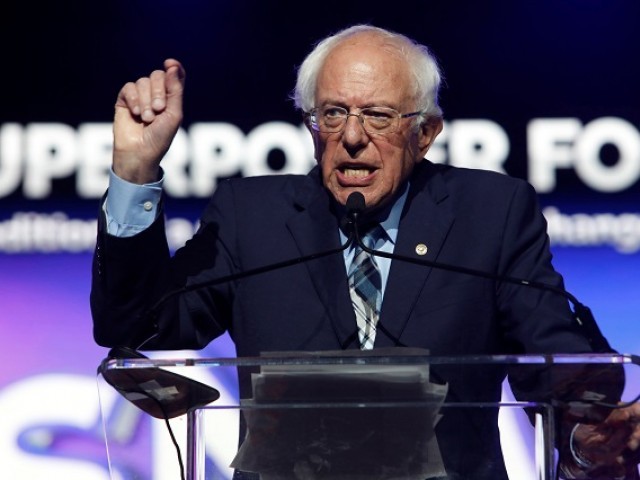 US Senator Bernie Sanders on Saturday expressed concern over the deteriorating conditions in occupied Kashmir and termed India’s actions “unacceptable”.

The veteran senator, who is a fierce critic of the Donald Trump administration, said the US government must ensure the implementation of international laws and should press for a peaceful resolution through the United Nations (UN).

“India’s action [in Kashmir] is unacceptable. The communications blockade must be lifted immediately, and the US government must speak out boldly in support of international humanitarian law and in support of a UN-backed peaceful resolution,” said Sanders, who is one of the leading Democratic presidential candidates.

Speaking at the Islamic Society of North America, the senator said India’s “crackdown in the name of ‘security’ is also denying the Kashmiri people access to medical care”.

“Even many respected doctors in India have acknowledged that the Indian government-imposed restrictions on travel are threatening the life care that patients need,” said Sanders.

He also condemned the increasing hate crimes against the Muslim community in the US, calling it “domestic terrorism”.

“We must speak out when we have a president and an administration who believes that Islam hates us,” he said.

“India’s action [in Kashmir] is unacceptable and the communications blockade must be lifted immediately, and the US government must be speak out boldly in support of international humanitarian live and in support of a UN backed peaceful resolution” @BernieSanders #isnacon pic.twitter.com/PrvgYzfqPs

A few days ago, Democratic congresswoman Ilhan Omar also urged Indian authorities in occupied Kashmir to respect human rights and to de-escalate the rapidly deteriorating situation in the disputed valley.

Ilhan, one of the first two Muslim women elected to the US Congress, is a member of her party’s progressive wing and a sharp critic of President Donald Trump and of Israel’s policy toward the Palestinians.

Her reaction over the deteriorating human rights situation came hours after Trump, who earlier offered to mediate between Pakistan and India over Kashmir, said on Monday that “Pakistan and India can handle the issue on their own, but I am here”.