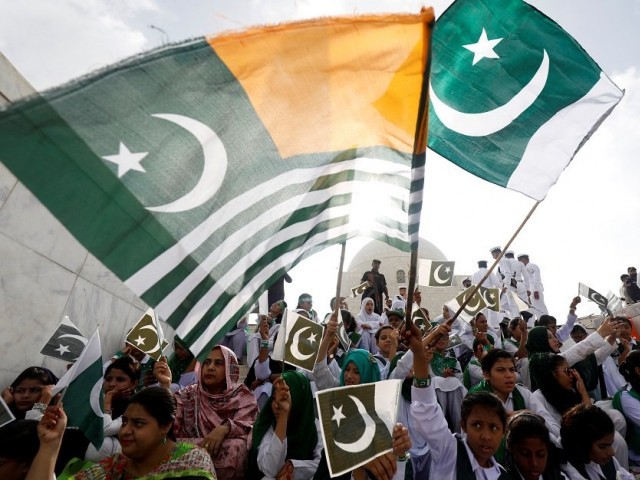 Attendees wave Pakistan's national flag and Kashmir's flag, to express solidarity with the people of Kashmir, at the Mausoleum of Muhammad Ali Jinnah. (Photo: REUTERS)

There is a general lament in Pakistan that there isn’t much we can do to respond to India’s re-occupation of Kashmir. Officials, experts and pundits all are shaking their heads in resigned pessimism and heard muttering, “We are too weak, too isolated and too cornered to respond in any meaningful way so better to wait till we are stronger and then do something on Kashmir.”

There are many others who are spinning another defeatist narrative: “Is Pakistan more important or Kashmir? Let’s just focus on ourselves and let Kashmiris handle their own fate.”

The State of Pakistan may be floundering in its response — what else would you call the silliness of halting life for half an hour — but it is for lack of imagination and preparation, not for a lack of options. In fact, Narendra Modi’s reckless re-annexation of an already annexed territory may have given us an opportunity that we did not have previously. So here are (at least) five short term, medium-term and long term things Pakistan can and should do to in response to India’s outrageous, illegal and provocative step:

1. Construct the right narrative: Our official position is linked to UN Security Council resolutions requiring a plebiscite in Jammu and Kashmir and this is fine. However now the narrative needs to be refreshed and refurbished in light of recent events. This new narrative though can only be constructed if we recognise that the existing one has run its course — case in point: the lacklustre response from even our friends when we needed them most to take a favourable position on Kashmir. After seven decades of wars and diplomacy, many of our talking points have become clichés. These clichés need to be replaced with a fresh story that takes into account: (a) India’s transformation into a brute majoritarian, intolerant and fascist country (b) Modi’s mainstreaming of bigotry by adopting it as official policy (c) India’s lurch towards political authoritarianism by trampling on constitutional protectionisms and trashing treaties to restructure the Indian polity in Hindutva colours; (d) India’s threat to regional peace by externalising its intolerance, bigotry and authoritarianism via hegemonic actions against Pakistan.

2. Formalise the conception, construction and dissemination of the new narrative: Pakistan and India may have been close to agreeing on a resolution of the Kashmir issue back in 2007 but today it is sad to say that the dispute will drag on for some time. We should approach it not as a series of unfolding events but a process whose wheels need to be constantly oiled with deeply deliberated policy. Therefore a narrative as crucial as this cannot be churned out through the State’s existing communication setups. A “Strategic Communications” body needs to be set up (chaired by the Prime Minister himself) that should include key communication officials of the State and experts from the private sector who have a grip on what type of narratives find traction in the current global landscape. Media and communications is a science and it cannot be left in the hands of those who have not trained and specialised in their field. That’s exactly what we have done so far. The abysmal results speak for themselves.

3. Engage with international leaders (who matter) armed with the new and improved narrative: (a) currently, we are focused on who we are engaging. Far more important is what we are telling them when we engage them. It makes little sense to expend diplomatic capital by getting key leaders for a meeting or a phone conversation and then repeating clichés dressed as talking points that have stopped having the impact we need them to have; (b) who is engaging key leaders and influencers and at how many different levels? Just having the Prime Minister meet his counterparts and the Foreign Minister phone another FMs is not enough. A detailed plan of engagement should ideally include (i) multiple levels at which such engagement should happen to connect with influencers from international political, social, cultural, academic, media, armed forces and even entertainment arenas to push for traction of the Kashmir narrative; (ii) The plan should figure out who are the most effective Pakistanis who should engage international influencers (sending the same tired old faces with formulaic talking points and little or no knowledge of the subject matter is a disaster we should never repeat again); (iii) The plan should have a matrix that can measure the success or failure of these engagements and churn out reports and recommendations for future engagements. This is key to ensuring we adopt and institutionalise a result-oriented approach instead of a task-oriented one.

4. Engage with Kashmiris and build their capacity to resist India’s illegal re-annexation of their land: This does not mean arming them or training them for violence but in fact enabling them to launch well-organised, deliberately-peaceful and quantifiably-impactful resistance to Indian colonisation. This right to resist an occupying power is an inherent right that no one can take away from them and one which we must help them exercise to the best of their abilities. The people of Kashmir will need to do a number of things: (a) re-organise their leadership in light of the re-occupation. This would mean inducting people who represent the new generation as well as perhaps those who have now belatedly felt the weight of India’s betrayal. Unity is strength and Kashmiris need all the strength they can garner. A re-energised, revitalised and re-organised leadership for this new challenge should be a top priority for them; (b) Organise the swelling cadres of people who are now ready and willing to become part of organised resistance to Indian colonialism in re-occupied Kashmir. Such organisation may include modes of peaceful resistance, means of communication, options for civil disobedience, writing and compilation of new literature of resistance, amplifying of resistance voices across India and the world, engagement with Kashmiri diaspora; (c) formal and informal cooperation with people from Azad Kashmir. In all these areas and more, Pakistan must play a central role in organising this capacity building for peaceful resistance of Kashmiris.

5. Rehabilitate Pakistan’s image: We have done many things to ruin our reputation. Now is a good time to make amends. As part of our medium-to-long-term policy, we should aim to fix our weaknesses and our international image while India plunges into state terrorism, religious extremism and communal mayhem. We should aim to do the following: (a) dismantle all Non-State Actor (NSA) organisations and infrastructure as NSAs have outlived their utility; (b) settle all our internal problems in erstwhile FATA, Baluchistan amicably; (c) Prioritise the welfare of all our minorities and legislate away all discriminatory laws; (d) Return to unalloyed constitutional democracy by allowing all branches of the State to keep a check and balance on each other and ensuring the vibrancy of a free media. The benefits of improving ourselves and our image and ruthlessly abandoning all policies, practices and prescriptions that burden us while India heads for the sewers are too obvious to state.