'No news of tortur­e or verbal alterc­ations in any part of the countr­y was receiv­ed'
By ​ Our Correspondent
Published: August 30, 2019
Tweet Email 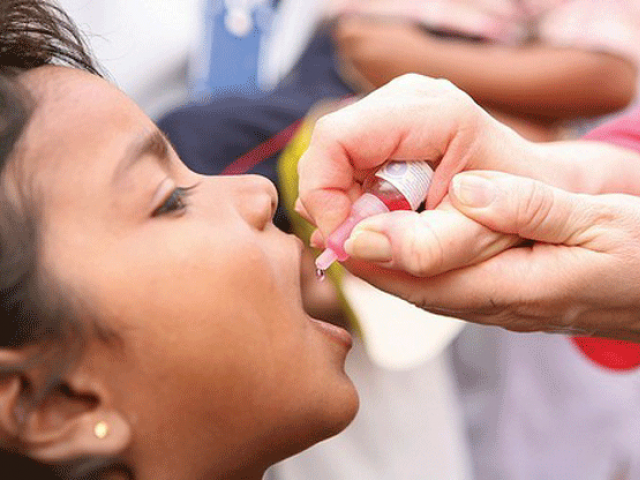 ISLAMABAD  : Around 7.1 million children in 46 districts of the country were administered polio drops in the recent vaccination campaign, according to the government figures.

“The recent campaign was successful,” read a statement issued by the Pakistan Polio Programme.

“No news of torture or verbal altercations in any part of the country was received.”

It further stated that 75 accounts on Facebook and YouTube against the campaign were blocked. “The performance of the deputy commissioners of Lahore, Peshawar, Swabi, Quetta, Nowshera and Hyderabad was outstanding.”

The statement read that the performance of the armed forces, police and other institutions was also remarkable. “For the first time in history, parents were convinced [to have their children vaccinated] without registering any FIR. Parents welcomed polio workers.”
Separately, the WHO’s Technical Advisory Group (TAG) on Polio Eradication concluded its two-day meeting with government officials on Friday.

It highlighted the urgent need for transforming the anti-polio programme to address the remaining challenges.
The meeting was attended by government representatives, polio eradication leadership at the national and provincial levels, partners and donors of the Polio Eradication Programme including Rotary International, the Centre for Disease Control and the Bill and Melinda Gates Foundation.

TAG Chair Dr Jean Marc Olivé said the country’s programme needed to regain the “one team” approach where all partners could work together.

Taking into account the existing challenges and expanding polio epidemiology with as many as 58 polio cases reported so far this year, TAG members stressed the need for Pakistan to urgently implement a transformation across the programme.

According to the TAG, this transformation must focus primarily on improving campaign quality, especially in high-risk union councils of polio transmission, and building community trust, strengthening routine immunisation and collaboration with the Ehsaas programme for the delivery of clean water, sanitation, hygiene and nutrition.
State Minister of Health Dr Zafar Mirza appreciated the TAG recommendations and reiterated the government’s resolve to end polio.

“I assure TAG that we will work tirelessly together to achieve this goal during the upcoming low transmission season, and will provide all the requisite oversight, ownership and accountability necessary to do so,” he said.

Prime Minister’s Focal Person for Polio Eradication Babar Bin Atta said Pakistan would put all of its efforts into making sure TAG’s recommendations were implemented.

Representatives of the partner and donor agencies reassured the government of their continued commitment to support the country’s efforts to eradicate polio.

WHO Representative in Pakistan Dr Palitha Mahipala said: “We are hopeful that with the extraordinary fovernment leadership and commitment as well as support of the TAG, we will soon be able to turn this situation around. I want to reiterate that you have the WHO’s full support to make Pakistan polio-free in the near future.
Country Representative for UNICEF in Pakistan, Aida Girma said, “This TAG meeting has extensively discussed the challenges and opportunities for strengthening the communications component of the programme.

She added that further support from all partners would be required to implement key communication strategies from the National Emergency Action Plan with dedicated communication teams to increase community trust in the programme, increase vaccine acceptance and generate demand for polio and immunisation services.

“UNICEF commits all available technical support for this area of work.”