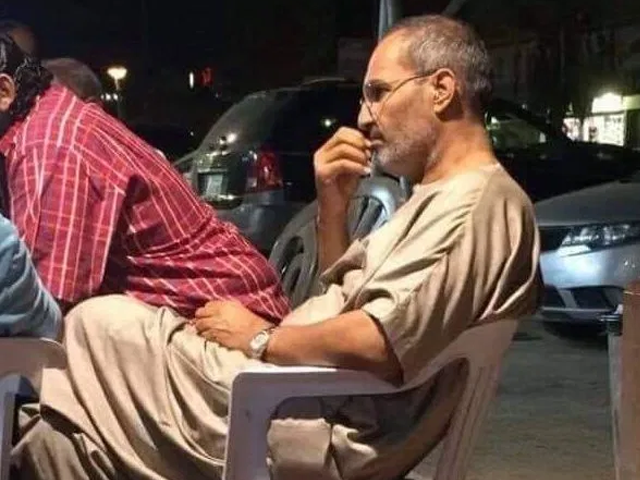 An eerie snap of a Steve Jobs lookalike has sparked bizarre conspiracy theories that the late tech genius might still be alive and hiding in Egypt.

The Apple co-founder, who sparked a tech revolution around the world, passed away in 2011 after a long battle with cancer. He was 56 years of age at the time.

But a photo of a man who looks strikingly similar to Jobs having a coffee in Cairo has fuelled rumours that he is actually still alive, reported The Sun.

Also, the lookalike does not seem to be wearing any shoes, which may strike a chord with fans who know Jobs used to walk around barefoot while brainstorming.

Having said that, eagle-eyed social media users have pointed out the man in the photo is not wearing an Apple watch – surely a vital giveaway. Plus, the photo was posted to Facebook on Saturday but it is not clear when the picture was actually taken.

Once shared on social-networking site Reddit, the snap attracted hundreds of comments, with some convinced it was the real Jobs.

There’s a conspiracy theory that Steve Jobs faked his own death to lead a simple life in Egypt. This is a photograph posted this week. I am skeptical that he would do this. But this photo does get you wondering.

If it isn’t him, it is evident that we all have doppelgängers. pic.twitter.com/5m2Eop4bEt

It's not like Lawrence O'Donnell reported Steve Jobs is alive & well and living in Egypt. pic.twitter.com/rTypq33GRY

Apple: steve jobs has passed away
Egypt: not to us pic.twitter.com/S2vK3PVnaK

While some joked he was spotted in Pakistan as well.

Steve Jobs is discovered alive and living in Egypt! pic.twitter.com/V7de4wOT5P

This is not the first time conspiracy theorists have questioned whether Jobs is really dead or not. A selfie posted to Reddit five years ago sparked claims Jobs was hiding out in Rio de Janeiro. But again, there was no evidence to show when the photo was actually taken.