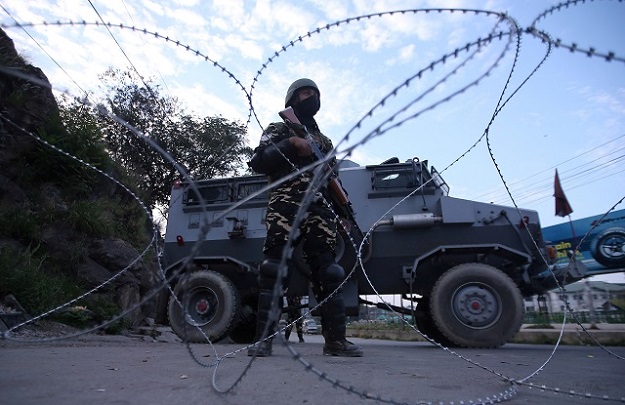 An Indian security personnel stands guard on a deserted road during restrictions after scrapping of the special constitutional status for Kashmir by the Indian government, in Srinagar. PHOTO: REUTERS.

Today marks 23 consecutive days of curfew since India abrogated the special status of the occupied valley.

According to KMS, the internet, cell phones, any kind of broadcasting service, landlines and even the local newspapers have been restricted. However, this has not stopped residents to take to the streets and protest since they face a dearth of food, medicines and other basic amenities.

In this ‘do-or-die’ situation for Kashmiris, many protestors worry about their families as they are abducted by the Indian security forces during nocturnal raids. More than 11,000 Kashmiris have been arrested since 2016, 91 women have been widowed and 205 children have been orphaned.

As human rights violations by the  Indian occupying forces take a darker turn, the Kashmir Media Service has reported that since 2016, more than 10,000 protestors have been shot at with pellet guns and teargassed.

Approximately 900 women have been gang-raped and molested and more than 3,000 structures, including business and residential, have been destroyed.

Earlier, United Nations human rights experts called on India to lift the lockdown and communication blockade it had imposed on occupied Kashmir as a global advocacy group focusing on genocide issued an alert for the disputed region.

In a strongly-worded statement released by the Office of the UN High Commissioner for Human Rights (OHCHR), the experts urged India to end what it termed a form of ‘collective punishment’ on Kashmiris.

“The shutdown of the internet and telecommunication networks, without justification from the government [of India], are inconsistent with the fundamental norms of necessity and proportionality,” the statement quoted the experts as saying. “The blackout is a form of collective punishment of the people of Jammu and Kashmir, without even a pretext of a precipitating offence.”

“We remind the Indian authorities that the restrictions imposed by the Indian Government are intrinsically disproportionate because they preclude considerations of the specific circumstances of each proposed assembly,” the experts added.

The OHCHR statement also noted with extreme concern reports of arrests of political figures, journalists, human rights defenders, activists and others, and of use of excessive force against protesters.

“The experts said they were deeply concerned by reports that security forces were conducting night raids on private homes leading to the arrests of young people,” the statement read.

“Such detentions could constitute serious human rights violations. The allegations must be thoroughly investigated by the authorities, and, if confirmed, those responsible must be held accountable,” it quoted the experts as saying. “We are gravely concerned about allegations that the whereabouts of some of those detained is not known as well as the general heightened risk of enforced disappearances, which may proliferate against the backdrop of mass arrests and restricted access to the internet and other communications networks,” the experts added.

Regarding the use of excessive force and live ammunition against protesters, the experts said: “India has the responsibility to use the minimum force necessary when policing protests. This means that the use of deadly force is a measure permissible only as last resort and to protect life.”