War is not the soluti­on, says Awan
By Anadolu Agency / ​ Our Correspondent
Published: August 24, 2019
Tweet Email 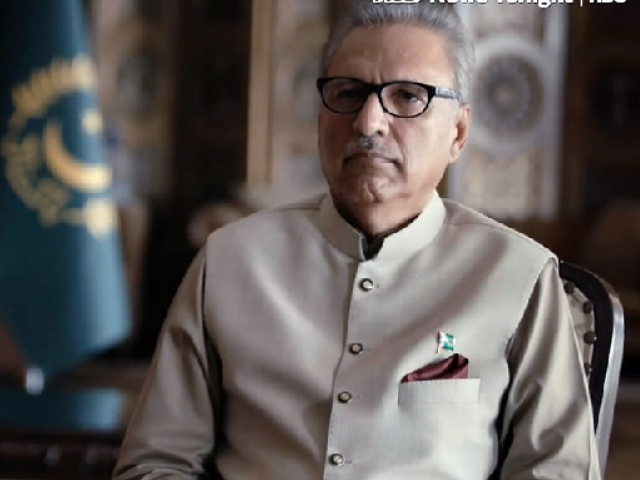 President Dr. Arif Alvi has warned that India is “playing with fire” in the Indian occupied Kashmir by changing the status of the territory, state-run Radio Pakistan reported on Saturday.

In an interview with a Canadian-American media outlet, Vice News, the President said that India is living in fool’s paradise if they are feeling that they will improve the situation with revoking the special status of Kashmir.

“The international community should continue putting pressure on India to foil its hegemonic intent to swallow the whole Kashmir,” Alvi urged.

He added that India could carry out false flag operation and attack on Pakistan to divert the international community’s attention from Kashmir’s situation.

The president also suggested that India should withdraw the constitutional amendments and allow Kashmiri people to decide their own future.

The president on Saturday also posted a video on his twitter account in which Kashmiri men and women staged a protest and chanted slogans against the Indian government’s action to revoke the special status of the valley.

This is Srinagar yesterday despite curfews, bans, blackouts, teargas & firing. No amount of oppression & brutality can suppress the resentment of the Kashmiris against India. They want freedom at all costs. Please retweet and let the world know. pic.twitter.com/2OqueQmJpY

“This is Srinagar yesterday despite curfews, bans, blackouts, teargas & firing. No amount of oppression & brutality can suppress the resentment of the Kashmiris against India. They want freedom at all costs. Please retweet and let the world know”, President Alvi wrote as caption with the video clip.

‘War is not the solution to any problem’

Special Assistant to the Prime Minister on Information and Broadcasting on Saturday reiterated the country’s resolve if India makes an aggressive move and said the people stand shoulder to shoulder with its armed forces.

The special assistant expressed full confidence in the Pakistan Army.

“War is not the solution to any problem but if India forces war on us, we know how to defend ourselves. We have the capacity, capability and commitment, which we have demonstrated before,” she said.

The de facto information minister said Indian Prime Minister Narendra Modi has erased the secular face of India and is moving towards a hardline Hindu state.

“Pakistan tells the international community to intervene because of state terrorism by India and Modi’s personal conduct and the RSS ideology indicates that they have erased the secular face of India and they are moving towards a Hindu state. The first target is Muslims, and Kashmiris are an easy target for them,” she added.

Responding to a question regarding Kashmir being an Indian issue, the special assistant said it is a constitutional and legal issue.

Pakistan to fight for Kashmir ‘till last bullet’

“India’s claims are baseless and fictitious because this is regarded as a disputed issue at an international level. The fact that the United Nations Security Council (UNSC) discussed the matter proves this isn’t solely an Indian issue,” she added.

The Indian-occupied region has been facing a clampdown since Aug. 5, when the Indian government revoked Article 370 of the Indian Constitution, which conferred it a special status.

Hundreds of people, mostly political leaders, have been detained or arrested by authorities since the move.

Kashmiri leaders and residents fear the move is an attempt by India to change the demography of the state, where some groups have been fighting Indian rule for either independence or unification with neighbouring Pakistan.

According to several human rights groups, thousands of people have been killed in the conflict in the region since 1989.

Rohingya in Karachi: Striving for success