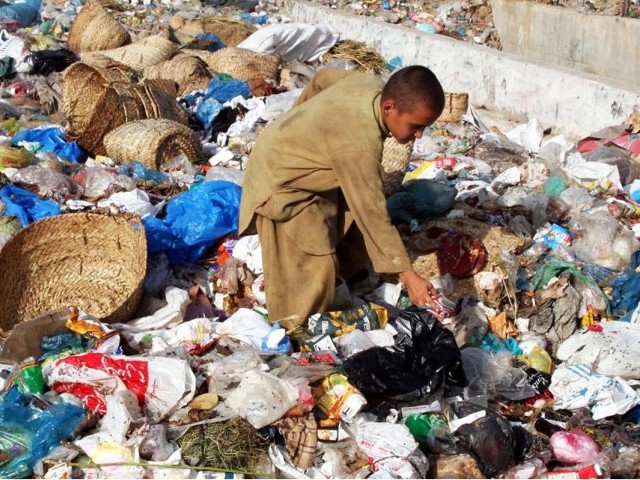 A young boy searching items in garbage on a road in Karachi. PHOTO: ONLINE

In recent years, plastic pollution has become one of the most pressing environmental issues. The rapidly increasing use of plastic products will eventually overwhelm the world’s ability to deal with it.

Pakistan, unfortunately, underestimates the total volume of plastic waste that flows into our ocean. Recent initiatives, such as the banning of single-use plastic, have been applauded throughout the country, but the overall picture remains bleak. Millions of tons of plastic are released directly into the Arabian Sea. Every morning at Sea View, Karachi, a tractor comes by to collect the plastic waste that is washed back ashore. It is a clear indicator that plastic waste has become intolerable for the ocean’s deteriorating eco-system.

Scientists have identified another troubling development in the shape of micro-plastics, which include broken-down plastic waste, synthetic fibres and beads. Mistaken as food, these toxic substances are consumed by marine life. These alarming reports are still latent but foreshadow far worse effects in the coming years. Globally, around three billion people in the world rely on both wild-caught and farmed seafood as their primary source of protein. With micro-plastics becoming more and more widespread, the food industry will inevitably face numerous hurdles in the near future. Moreover, not many environmentalists know that a single-use plastic takes 1,000 years to decompose.

Banning single-use plastic bags is not a long-term solution to completely eliminate the use of plastic in Pakistan. In Sindh, even after the provincial cabinet imposed a ban on plastic bags back in November 2018, its use kept on increasing at an alarming rate.

Now, following the ban in Islamabad, the Sindh government has once again decided to impose a “complete ban” on the use of plastic bags by October 2019. Will there be proper implementation of the ban, this time, or is it just another political move?

The “Let’s Clean Karachi” initiative has got quite the attention. Several NGOs have expressed their desire to assist the programme and eventually eliminate trash from the cosmopolitan city. Unfortunately, the problem will continue to persist until the people of Karachi, regardless of their socio-economic backgrounds, modify their lifestyles. Almost every citizen contributes to the ever-growing rates of garbage on the streets.

With no Solid Waste Management initiatives and substandard recycling facilities, plastic waste will inevitably end up in the ocean. However, a recent programme in Australia, called Net Technology, has been globally acknowledged. These drainage nets, also called “trash traps”, placed at the point where the drainage meets the ocean, are designed to prevent pollutants and plastic debris from flowing into the sea. Once the nets are full, they can be emptied into landfills for recycling. It is high time for authorities to install these drainage nets. Last year, on Twitter, President Arif Alvi also quoted it as an “interesting solution”, but nothing has been done since.

Recently, Pakistani authorities have finally decided to act. From running public awareness campaigns to introducing solid waste management, all these initiatives must be properly introduced and implemented if there is any chance of reducing plastic pollution. Pakistan not only needs to improve the way it manages its plastic waste but also must cut down the flow of plastic from the source. Civilians can play the most critical role in eradicating the problem. Reversing the ocean’s misery has now become more indispensable than ever.

How India was lost