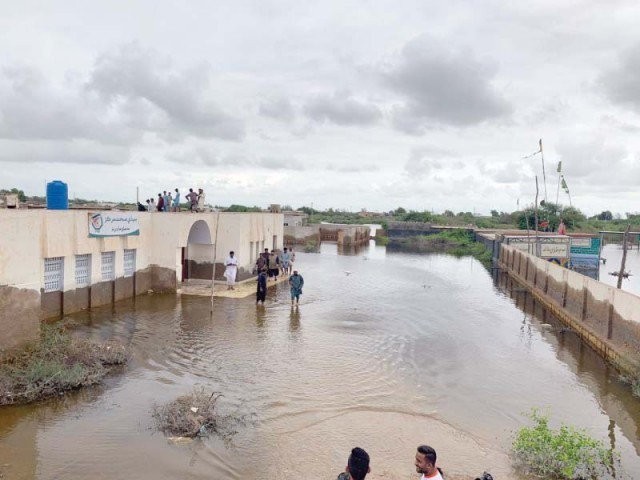 A Basic Health Unit in Mirpur Sakro taluka remains submerged in water days after the recent spell of monsoon rains. Locals from the nearby village have started migrating. PHOTOS: COURTESY SALEEM LAKHO

HYDERABAD: The Thatta District Council passed on Thursday a unanimous resolution, asking the Sindh government to declare Thatta disaster-hit in the wake of the torrential monsoon rains. The members said that the district has been flooded by saline water channels and mountain streams.

They also called for a special redevelopment package for the coastal district. The council’s session, chaired by chairman Ghulam Qadir Palijo, demanded that all the provincial taxes as well as the agricultural loans should be waived for the ongoing year. Thatta recorded 142 millimetres of rain in a single day on August 11.

“The session should have been held much earlier to help the rain-affected people of Thatta,” said councilor Abdul Hameed Panhwar. He questioned why the district council did not spend its budget to mitigate the calamity situation. “The development budget of this year should be spent on restoring the affected people back to their normal lives.”

Another councilor, Mashooq Babbur, said dozens of villages have been flooded and as many cut off from the semi-rural towns of Thatta. “People migrated from the villages which have been completely marooned.” He pointed out that shortage of food and water has been reported from many affected villages. Babbur suggested that the saline water channels which flooded a lot of villages should be redesigned and reconstructed to prevent future flooding.

“The flooding has been caused by the failure of the irrigation department,” said councilor Abdul Khaliq Soomro. He said that every year, the irrigation department claims spending millions of rupees of maintenance and desilting of the saline water channels but the recent rain-entailed flooding exposed their corruption. Soomro complained that the officials of the relevant government departments were not in attendance of the council’s session despite notice.

Shazia Khaskheli said thousands of families have not only become shelterless but starvation is also creeping upon them. “The people are also falling ill because of poor sanitation and lack of food.”