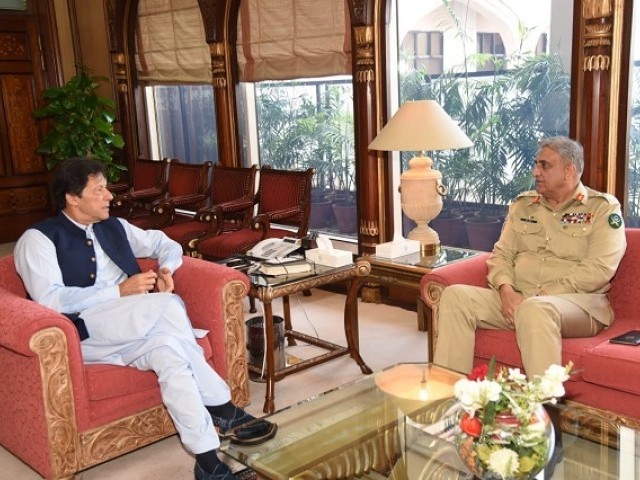 Discussions focused on matters of national security and the situation in Indian Occupied Kashmir (IOK).

This was the duo’s first meeting after the premier approved a three-year extension in General Qamar’s tenure as army chief.

The extension, announced on Monday, was granted “in view of the regional security environment”.

“General Qamar Javed Bajwa is appointed Chief of Army Staff for another term of three years from the date of completion of current tenure. The decision has been taken in view of the regional security environment,” read a brief statement issued by the PM Office.

General Bajwa was set to retire on November 29 on completion of his three-year term but now he would continue to serve as head of the army until November 2022.

Pakistan to fight for Kashmir ‘till last bullet’

The government and army have put up a united front in the face of rising tensions with India.

At a joint press conference this past Saturday, Foreign Minister Shah Mehmood Qureshi and military spokesperson Major General Asif Ghafoor demanded the withdrawal of Indian forces from IOK and vowed to fight for the disputed territory “till the last soldier and bullet”.

“Pakistan is fully ready to counter the evil designs of India with its highly professional armed forces, all other institutions and a spirited nation,” said Qureshi.

Major General Ghafoor said India should forget about Azad Jammu and Kashmir and “talk about bringing an end to its illegal occupation [in IOK].”

Prior to that, Pakistan Army’s Director General Military Operations (DGMO) Major General Nauman Zakaria, in a briefing to the National Assembly’s (NA) parliamentary committee on national security, said the armed forces were equipped to deal with any unusual situation arising out of Indian misadventure.

He said that soldiers at the border have been alerted and directed to effectively respond to any aggression by the state’s enemy.

Maleeha Lodhi: Spilling tea with the architect of Pakistan’s diplomatic coup at the UN