Dwayne 'The Rock' Johnson gets married

Dwayne 'The Rock' Johnson gets married

"We do," the actor captio­ned his Instag­ram post of his weddin­g in Hawaii­
By Entertainment Desk
Published: August 19, 2019
Tweet Email 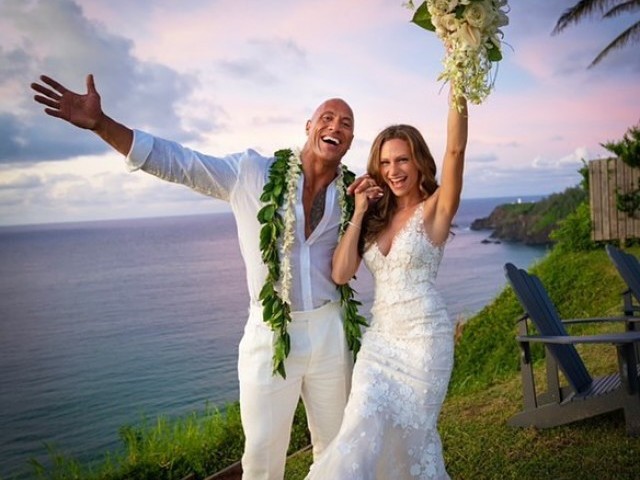 Hollywood star and former WWE wrestling champion Dwayne ‘The Rock’ Johnson has a special teat for his fans on his social media.

The star took to Instagram to share a wedding photo with his new wife, Lauren Hashian, looking happy in love in Hawaii. “We do,” Dwayne captioned his sunset-filled picture of the newly-married duo.

The Rock wore a white linen shirt and trousers, while Lauren wore a gorgeous sheer gown with flower appliques.

Lauren is the long-time girlfriend of the Fast & Furious star and the pair reportedly began dating in 2007. She is a singer, songwriter and music producer from Massachusetts, USA.

The pair have two children together, Jasmine and Tiana. He also shares a 17-year-old daughter, Simone, from his previous marraige with Dany Garcia.

Was so proud and excited to watch Jumanji with my man and congratulations to everybody who was a part of it because the movie is SO good!!! Felt so good to sit in the theater and laugh out loud @therock @kevinhart4real @jackblack @karengillanofficial @danygarciaco @hhgarcia41 and even shed a tear at the end. Congratulations all!!.. saw a few men tear up around me but I promised I won’t name names lol ;) Thank you for a night of magic @therock ❤️ and for palming our belly! ✨✨✨#Jumanji

The Rock recently gushed about his family on Good Morning America. “As men, you know, you’re like, ‘Oh yeah I’m going to raise my son’. But having all daughters, it’s the greatest blessing I’ve ever had,” he said.

“So there is this balance – having all this estrogenic energy – then also me having the opportunity to infuse father and hopefully setting a standard of what a man should be in their lives.”

Have something to add to the story? Share it in the comments below. EnterEnter