Sinking in the rain

Sinking in the rain

Over the years we have seen one agency blame the other
By Kamal Siddiqi
Published: August 19, 2019
Tweet Email 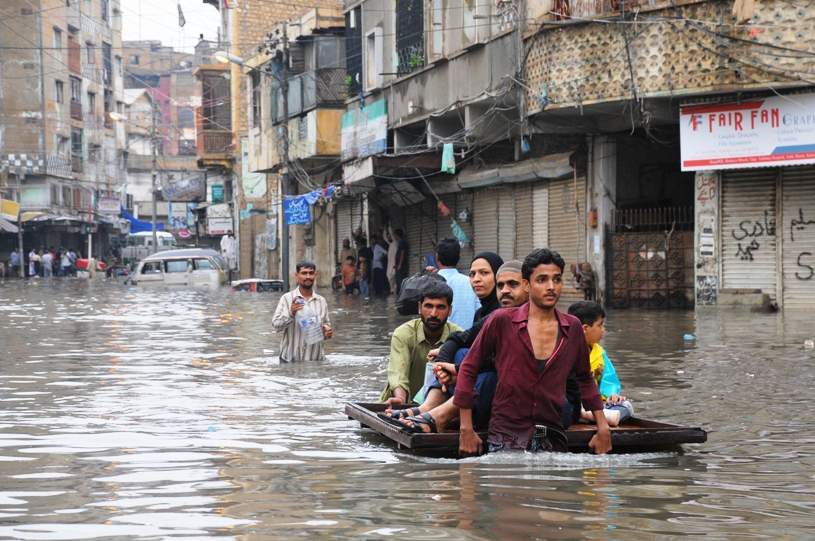 Why is it the every time it rains in Karachi, the city’s infrastructure collapses within hours? Possibly Karachi is one of the few cities in the world where after a day of showers, offices and educational institutions have to be declared closed. And rightly so.

Streets are flooded to the point that it is almost impossible to travel on them. Water enters into people’s homes. Power is shut off in areas where flooding is high because of possible electrocution. The city comes to a standstill and essential items like food and drinking water fast become scarce. There is an air of uncertainty with fear that panic may set in.

This year, in the latest spell of rain, over two dozen people lost their lives and 46 others suffered injuries in rain-related incidents across Sindh. Of this, the majority of deaths took place in Karachi.  Most of the victims died of electrocution or when a wall or the roof of their houses collapsed, while at least one drowned when the truck he was driving fell into the Malir River.

Up to nine inches (200.6mm) of rainfall was recorded in Karachi’s Surjani Town as the average rainfall recorded at 12 weather stations was over six inches (158.33mm).

Time and again we have seen that while valuable lives and property is lost because of flooding caused by rains, one quarter blames another but nothing really happens to address the issues.

The first question to ask is why do Karachi’s streets turn into rivers during the rain. The answer is that Karachi has a problem with its outlets. The water cannot get to the sea which is the major reason for the flooding.

Karachi is served by 42 major nullahs. Most of the city’s underground sewer lines feed directly into these open, natural drains. Most of these nullahs lead to the city’s two rivers, the Malir River and the Lyari River. Both rivers flow south to the sea. It is one vast interconnected natural drainage system for both sewage and excess rainwater.  But what is criminal is that numerous nullahs around the city have been encroached upon, narrowed or covered up completely.

There are five major drains that don’t flow directly into the city’s two big rivers, but feed into the backwaters of Mai Kolachi: Kalri drain, Pitchard drain, City Railway drain, Soldier Bazaar drain and Nehr-e-Khayyam.  These too are increasingly being blocked.

In an article written this month, Dr Noman Ahmed of the NED University noted that Karachi has seen intense densification in existing neighborhoods due to the street commercialization policy enforced by the City District Government since 2002. Over 40 major corridors have been declared commercial areas.

The policy has enabled the plots on these streets to be converted into high-rise constructions. At the same time, the ensuing pressure on water supply, electricity, sanitation, drainage, transportation and parking space was not taken into consideration. It was criminally assumed that by earning revenue, the vices of development could be ignored.

Dr Noman points out that spot densification alters the rain and sewage water flow gradients. Property owners only develop their own plot-level services with no consideration of the overall flow of water. In many cases, physical structures such as speed breakers obstruct the water path.

The other problem is cleaning of the nullahs. Because it does not rain for years, these drains get clogged up.

Interestingly, a short while ago, a federal minister launched a cleaning drive for Karachi. At the onset, the clean-up of storm drains began. With enormous expenditure on manpower and machinery, some nallahs were partly cleaned and the recovered solid waste was deposited at their edges. As rain intensified, the collected waste slipped back into the drains.

Solid waste is deposited into the drains as no alternative is available. With rising consumerism, solid and liquid waste has multiplied. An intelligent approach is required to manage the waste in an environmentally friendly manner.

But will there be an intelligent approach, one wonders. Over the years we have seen one agency blame the other. More recently with the provincial government headed by the PPP and the federal government run by the PTI, the blame game has reached new proportions. Earlier it was the MQM blaming the PPP. Now the war of words is between the PPP and the PTI.  The Karachi resident suffers throughout.