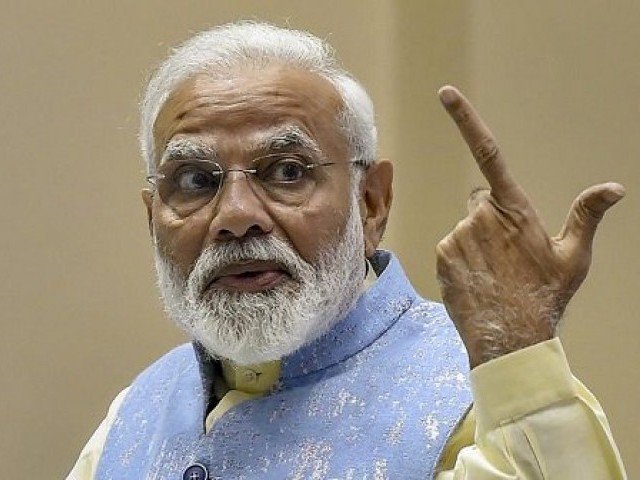 LAHORE.: Jamaat-e-Islami (JI) chief Senator Sirajul Haq on Saturday said the Indian Prime Minister Narendra Modi has taken the path of destruction by revoking special status of India Occupied Kashmir (IOK) as he delivered a rejoinder to the Indian defence minister’s veiled threat that New Delhi might change its ‘no first use nuclear policy’.

“The threat of nuclear annihilation doesn’t intimidate Pakistan. It rather shows India’s desperation,” Haq said while talking to the media after visiting residence of a martyred soldier, Taimur Aslam, in Lahore.

“Modi’s downfall will start soon and a new Pakistan will emerge in India where the oppressed classes will be freed from the exploitative system imposed by India’s saffron-clad extremists,” he said.

He also urged the government to remove the bar on cross-border movement by ending the agreement with New Delhi regarding the Line of Control and the Working Boundary.

Haq pointed out that the international community had taken notice of the issue as the UN Security Council took up Kashmir dispute after five decades and acknowledged that India’s unilateral action had not only jeopardised the regional security but was also responsible for gross human rights violations.

He also expressed dissatisfaction with the government’s response to the situation, saying the country’s foreign policy was following old pattern. “Governments have given preference to trade with India instead of focusing on resolving the Kashmir issue.”

He said Modi and former Indian premier Atal Bihari Vajpayee, who visited Pakistan in 1998, were accorded a red carpet welcome. He added that even after the recent downing of an Indian warplane, which had entered Pakistani airspace, the pilot was released within 48 hours

He also lashed out at the Muslim over its failure to adequately raise the Kashmir issue. “The leadership of the Muslim nation must rest with Pakistan and Turkey as majority of the Muslim nations are expressing helplessness. If the Organisation of Islamic Cooperation (OIC) leadership had dispensed its responsibilities, then issues like Kashmir and Palestine would not have existed.”

He said the Indian forces had opened fire on unarmed civilians and were using coercive tactics to repress the indigenous uprising in Kashmir. “The treatment being meted out to the elderly, women and children is shameful. If India thinks it can hide its barbarism through a communication blackout and curfew, then it has another thing coming.”

He added that educational institutes in Kashmir had remained shut since the abrogation of the Article 370 on August 5, with the entire region of the Indian Occupied Kashmir (IOK) had turned into a prison.

“More than 200 intellectuals of India have filed a petition in India’s top court to restore Article 370,” he said, referring to “the constitutional sleight-of-hand used by the Bharatiya Janata Party (BJP) led government for the annexation of Kashmir”.

The senator also announced his party’s absolute support for any step that the government takes for the freedom of Kashmir. He demanded that the government roll back the Simla agreement while maintaining that no talks on Kashmir would be successful without inclusion of the Kashmiris.

The JI leader was accompanied by Javed Kasuri, the party’s central Punjab chief, the information secretary Qaiser Sharif. Haq also lauded the efforts of the armed forces in protecting the nation’s border while commending the sacrifices of Lance Naik Taimur Aslam and his colleagues.