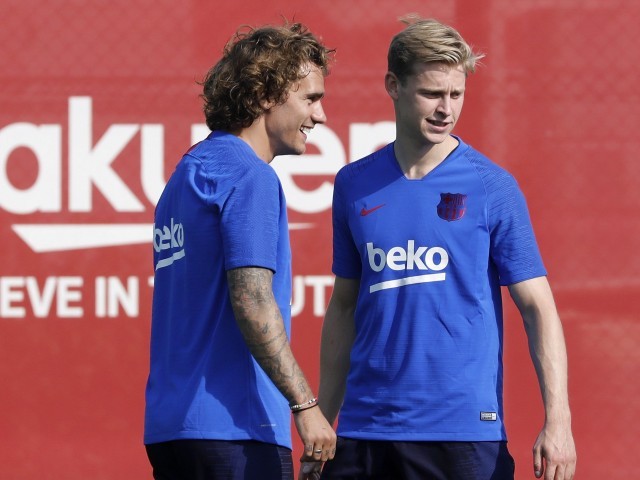 Barca face Athletic Bilbao on Friday, boosted by the signings of Antoine Griezmann and Frenkie de Jong this summer, while Madrid play away at Celta Vigo, with Eden Hazard set to make his debut. PHOTO: AFP

MADRID: Barcelona begin their title defence and Real Madrid will hope to launch their revival as La Liga returns in Spain this weekend.

Barca face Athletic Bilbao on Friday, boosted by the signings of Antoine Griezmann and Frenkie de Jong this summer, while Madrid play away at Celta Vigo, with Eden Hazard set to make his debut.

Atletico Madrid have enjoyed an impressive transfer window and some believe Joao Felix, the 126-million euro arrival from Benfica, could even lead a title charge.

Hazard raised eyebrows by returning to pre-season out of shape but there was nothing lethargic about the stunning goal he scored against RB Salzburg earlier this month.

Real Madrid struggled for goals and creativity last season. Zinedine Zidane is relying on Hazard to solve the problem and be the catalyst for a much-needed revival.

Many wondered whether it was prudent to spend all the money from the sale of Griezmann on a player who has barely started his senior career but Felix has dazzled in pre-season and already erased the frustration of the Frenchman’s departure.

The 19-year-old will need time but could unlock a more adventurous Atletico, who look well-placed to challenge.

De Jong was at the heart of Ajax’s barnstorming Champions League run last season but he faces a different challenge at Barcelona.

He becomes the leader of a new generation emerging at Camp Nou and whether alongside or instead of the 31-year-old Sergio Busquets, De Jong will be expected to exert more control in midfield.

After winning the Copa del Rey and snatching fourth place, Valencia backed their coach Marcelino Garcia Toral by signing his number one target from Celta Vigo.

Maxi hit 13 goals for a struggling Celta side last season and could be crucial to Valencia’s hopes of making the top four again, particularly if Rodrigo Moreno completes a shock move to Atletico Madrid.

It was perhaps not surprising that Odegaard failed to live up to the extraordinary hype that surrounded his move to Real Madrid as a 16-year-old in 2014.

But a two-year loan at Real Sociedad offers the Norwegian a chance to build on an encouraging spell at Vitesse last season. Still a brilliant young talent, Odegaard should be able to step up.