US cuts Pakistan’s aid by $440 million

US cuts Pakistan’s aid by $440 million 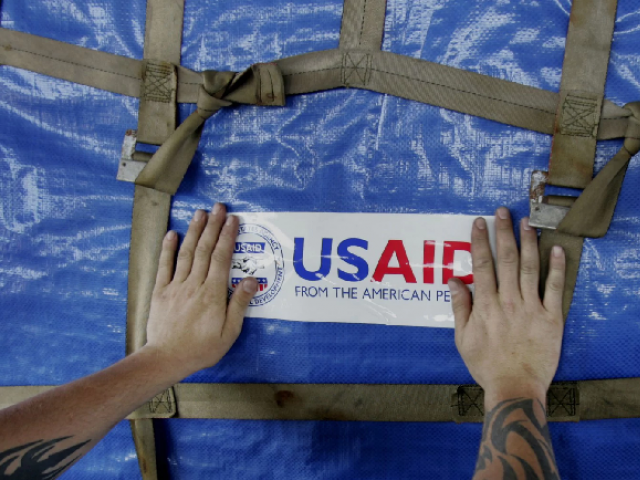 ISLAMABAD: The United States has further cut Pakistan’s aid by $440 million, bringing down its commitments under Kerry Lugar Berman Act to just $4.1 billion, which is slightly over half of the total amount that Washington had promised to give nine years ago.

The decision to cut Pakistan’s economic assistance, being disbursed under the Kerry Lugar legislation of 2009, was officially conveyed to Islamabad about three weeks before the planned visit of Prime Minister Imran Khan to the United States, sources in the Ministry of Economic Affairs told The Express Tribune.

The aid was being disbursed under Pakistan Enhanced Partnership Agreement (PEPA) 2010. PEPA that was going to lapse was extended by Pakistan last week aimed at facilitating the disbursements of the remaining $900 million grant, said the sources in the ministry.

PEPA was signed in September 2010 to make operational the Kerry Lugar Berman (KLB) Act that was passed by the US Congress in October 2009 to disburse $7.5 billion to Pakistan over a period of 5 years.

However, soon after PEPA agreement was made effective the relations between Pakistan and the US started deteriorating and reached nearly its lowest ebbs in decades. This also affected the actual commitments and disbursements under the KLB Act.

The sources said before the fresh cut the commitments under the KLB stood at nearly $4.5 billion that have now come down to $4.1 billion. But the actual disbursements, including off-budget, stood at just $3.2 billion, they added.

On first of July, the United States Agency for International Development (USAID) informed the federal government that as part of the Trump administration’s overall review, the amount of assistance under PEPA was reduced by $440.2 million, said the sources.

The Economic Affairs Ministry officials said Pakistan is not the only country that has been affected by the recent cuts in aid. They said the reduction in aid is part of President Donald Trump’s strategy to reduce the aid to the developing countries.

The USAID’s official version could not be immediately obtained due to an official holiday.

The KLB was aimed at making investments in Pakistan’s economic infrastructure, particularly in energy and agriculture, to help Pakistan recover from its energy and water crises, improve the daily lives of the Pakistani people, and increase opportunities for economic growth.

Out of $7.5 billion, an amount of $3.5 billion had initially been committed for high impact, high visibility infrastructure projects, $2 billion for humanitarian and social services and the remaining $2 billion for developing capacity of the government departments, according to State Department’s documents.

The sources said the $440.2 million cut would have serious implication for the USAID’s future projects in Pakistan. Out of the $4.1 billion reduced commitments, an amount of $900 million was still unutilised.

They said that due to slow disbursements and utilisation it was unlikely that the USAID would be able to consume the entire amount within one year. Because of this reason the government has further extended the agreement with the US.

PEPA is one of the four instruments that the US uses to disburse civilian economic assistance to Pakistan. The total commitment under the all instruments from the US since 2001 stands at $8.2 billion and the amount disbursed is $6.6 billion, according to the Economic Affairs Ministry.

Due to low-level of bilateral engagements and the USAID’s increasing reliance on contractors to do the job, the on-budget support has sharply reduced, standing at less than one-fourth of the total civilian assistance to Pakistan.

The USAID largely uses foreign organisations to execute its funded projects, which Pakistani authorities believe result into wastage of funds besides reducing the aid impact due to high administration charges claimed by these organizations. The USAID unilaterally selects these implementing agencies.

The sources said the Economic Affairs Ministry is looking into the proposal of conducing regular review of the US-funded projects – a task that has not been performed for last many years.

The Office of the Inspector General of the US has also conducted audit of the KLB aid to Pakistan few years ago. Its findings showed that the US could not achieve its long-term development objectives in Pakistan that it had set under the $7.5 billion Kerry-Lugar Act due to competing short-term political priorities of the State Department with the long-term objectives of the USAID.

About 30% of PEPA-funded awards that were previously audited by the Inspector General did not meet intended goals and another 55% did so only partially, according to the OIG report of 2015.