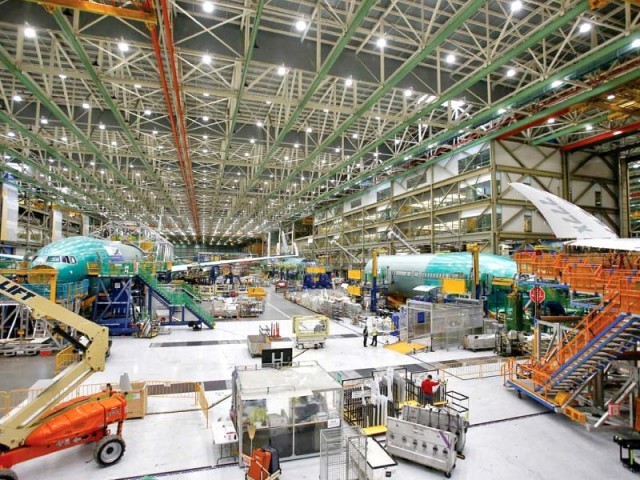 Boeing engineers have frozen development work on the ultra-long-range version of the 777X. The schedule delay could jeopardise competition with European arch-rival Airbus. PHOTO: REUTERS

SAN FRANCISCO / SINGAPORE: Boeing Co has pushed back the entry into service of an ultra-long-range version of its forthcoming 777X wide body, the US plane-maker said on Wednesday as it grapples with fallout from the 737 MAX crisis and engine issues with the 777X.

The fresh delay comes as the grounding of Boeing’s money-spinning 737 MAX single-aisle entered a sixth month in August and as the world’s largest plane-maker faces engine-related delays on the 777X wide body that have pushed the first flight of the 777-9 into 2020.

The delay in the slower-selling, longer-range 777-8 will hamper Boeing’s ability to provide a plane in line with the schedule for Qantas Airways Ltd’s plan for 21-hour non-stop Sydney-London flights.

The Australian airline had hoped for first deliveries of the planes in 2022 and the launch of the world’s longest commercial flight in 2023.

“We reviewed our development programme schedule and the needs of our current 777X customers and decided to adjust the schedule,” Boeing spokesperson Paul Bergman said by e-mail, adding that the manufacturer remained committed to the 777-8.

“The adjustment reduces risk in our development programme, ensuring a more seamless transition to the 777-8. We continue to engage with our current and potential customers on how we can meet their fleet needs. This includes our valued customer Qantas.”

The Air Current website first reported the delays, saying the 350-seat 777-8 model revised for ultra-long-range flights had originally been scheduled to enter service in 2022 after the arrival of the 777-9 in 2020.

The decision effectively means Boeing engineers have frozen development work on the ultra-long-range version of the 777X. The schedule delay could jeopardise competition with European arch-rival Airbus for a slice of the ultra-long-haul travel market.

Airbus, which is offering an ultra-long-range version of its A350-1000, and Boeing have already submitted their “best and final” offers to Qantas for planes capable of the 17,000km (10,560-mile) Sydney-London route, a Qantas spokesman said.

“We still expect to make a decision by the end of this calendar year,” he said.

Boeing’s proposal included a “compelling option” to help deal with the 777-8 delay because it was keen to stay in the race, according to a source with knowledge of the matter, who was not authorised to speak publicly.

An Airbus spokesperson said details of its discussions with Qantas remained confidential but the A350 was a “perfect solution” to meet the airline’s needs.

To date, Emirates and Qatar Airways are Boeing’s only customers for the 777-8, having ordered 35 and 10 respectively. The Seattle Times in June reported Emirates was renegotiating its 777X orders.

Emirates and Qatar Airways did not respond immediately to requests for comment about the 777-8 delays.

Earlier, a news report said Boeing Co delivered 38% fewer planes in the first seven months of 2019 than the same period a year earlier as the grounding and doubts around the future of its best-selling 737 MAX jets hurt operations.

Deliveries totalled 258 aircraft in the seven months through July, compared to 417 last year, and trailing far behind the 458 aircraft handed over in the same period by European rival Airbus.

The numbers put Boeing on course to lose the crown of world’s biggest plane-maker, which it has held uninterrupted for seven years.

The 737 MAX has been grounded worldwide following two fatal accidents that killed more than 300 people and both Boeing and airlines continue to extend the timelines for when it will return to service.