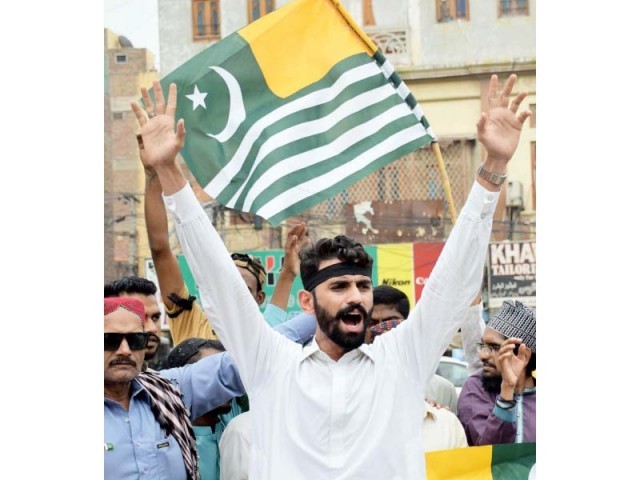 HYDERABAD: The people of Sindh observed a ‘Black Day’ on Thursday to condemn Indian savagery in occupied Kashmir and to express solidarity with the Kashmiris. Hundreds of rallies and demonstrations were organised across the province with the participation of political and social activists as well as common citizens.

The demonstrators burnt the Indian flag, effigies and portraits of Indian Prime Minister Narendra Modi as well as maps of the country. “The time has come to teach India a lesson,” said Syed Zulfiqar Ali Shah of Pakistan Tehreek-e-Insaaf, who led a rally in Hyderabad.

PTI’s Mustansar Billah said that Prime Minister Imran Khan was efficiently fighting the case of Indian-occupied Kashmir before the global community, adding that raising the matter in United Nations Security Council was an achievement of the PTI government. “Modi has been blinded by his political power in India. The day isn’t far when Kashmir will become part of Pakistan,” said Billah.

“Freedom is the fate of Kashmiri people,” asserted MQM-P Sindh organising committee’s Saleem Razzak in a statement. “The people of Pakistan will continue to support the people of IoK until they achieve freedom.”

The Sunni Tehreek’s provincial leader Imran Suharwardi decried the global community’s indifference to Indian barbarity in IoK. “The international community and Organisation of Islamic Countries (OIC) have so far kept silent over the Indian atrocities,” he bewailed.

Bishop Kaleem John of Dioses of Hyderabad Church of Pakistan, while addressing an event to observe the Black Day, said that the Christian community supported the aspirations of Kashmiri people. He condemned the use of force, the imposition of curfew and other tormenting measures adopted by the Indian government in IoK.

The PML-Functional’s Rashid Khan said Modi has become the personification of Adolf Hitler, adding that he and his country will also meet the same fate. Several rallies and protests were organised in Mirpurkhas district. Thousands of people participated in a rally in Sukkur district.

Speaking on the occasion, Pakistan Peoples Party’s central leader Syed Khursheed Shah said Kashmir’s freedom cannot be achieved through a dual policy, politics of hypocrisy and shallow slogans. “The international community has been blindfolded over the Kashmir dispute. Pakistan ought to open their eyes.”

Shah said that India has killed thousands of innocent Kashmiris over the last three decades. The federal privatisation minister, Mian Muhammad Soomro, said the United Nations will have to play a decisive role to resolve the dispute. The PML-F’s MPA Nusrat Sehar Abbassi said all political parties of Pakistan maintain an identical stance over the Kashmir issue.

The Sikh community’s representative, Sardar Mahesh Singh, said that Sikhs across the world support Pakistan’s stance over Kashmir. The district administration of Nawabshah organised a rally in which thousands of people from various walks of life took part.

Members of the Mirpurkhas Hindu Panchayat also held a demonstration. Fakir Rano Malhi, who led the Panchayat, deplored that the cruel Indian government has unleashed a reign of terror over innocent Kashmiris. He said their community has been praying for Kashmir’s independence. “The blood of innocent people will not go in vain.”

Thousands of teachers, students, social activists and lawyers took to the streets in Tharparkar carrying Pakistani and Azad Kashmir’s flags to observe the Black Day. Protests and demonstration were also held at several places in Karachi, Larkana, Kashmore, Jamshoro, Tando Muhammad Khan, Sanghar, Khairpur, Dadu and other districts of Sindh.