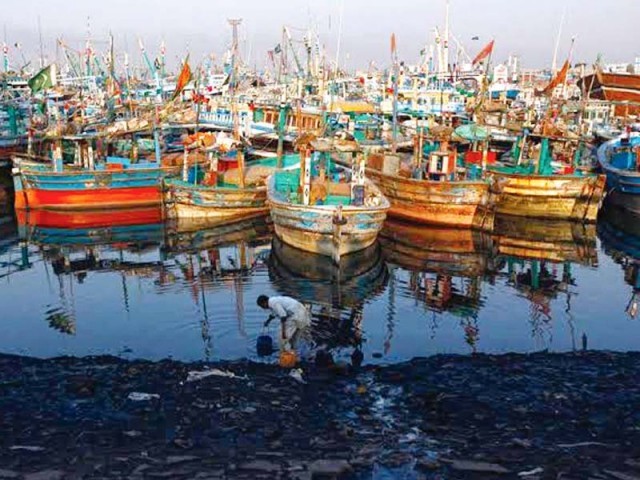 Fishermen living along the coastal belt of Sindh welcomed the recent spells of rain as they believe the increased flow of sweet water into the sea will raise the fish population. PHOTO: EXPRESS

KARACHI: Though the recent spells of monsoon rains disrupted urban life and wreaked havoc upon the coastal districts of Sindh, they proved to be blessing for marine life and in turn the fishermen, who believe the rains will help increase the number of fish in the coastal belt.

“Life comes back to us,” said Mohammad Siddique, a fisherman from Ibrahim Haidery. “We will have new marine life in the coming days. It’s not green on earth but inside the sea, it’s green now.”

Sharing the sentiments of his community, Siddique said that the fishermen know the value of sweet water [rains]. “Even heavy rains bring good news for us,” he said, adding that fish production has decreased in the last couple of years due to overfishing. “The government doesn’t care about marine life but nature is with us.”

The fishermen community, living along the 135-kilometre-long coastal belt of Sindh has been badly disturbed due to the lack of sweet water flow into the sea. Several families have started moving from the coastal villages to towns and cities in search of jobs.

“The situation in Thatta and Badin districts doesn’t suit our people,” Siddique said. “I hope people who migrated will come back now.”

Mohammad Ali Shah, who has been representing the fishermen community for the last two decades, said that the rainwater enriches marine life. “It is a natural process and rains recharge the ecological system. Rains have environmental benefits.”

“Let the water flow directly into the sea. It is natural and it reacts badly when disturbed by us [human beings],” commented Shah. “Rivers will have more water. Lakes will be recharged. Overall, rains have a good impact on our environment,” said Shah, adding that people should not think of rain as a curse. “It’s a blessing.”

Speaking about the post-rain situation in Karachi, Shah lamented that the port city could not even afford seven inches of rainwater. “Mumbai [India] is one of the better-planned cities in the region that could support its residents even if there are 600 inches of rain,” he said.

According to Shah, Sindh has the longest continental shelf and the inflow of sweet water is necessary for life on the coastline. “Sweet water [through rivers or rains] brings silt and nutrients to the sea which is naturally needed,” he justified.

“We will have huge fishing production in coming years,” commented Muhammad Moazzam Khan, the technical adviser for the World Wide Fund for Nature (WWF). “The rain is always good for marine life,” he added.

He said that rainwater enters the sea from all sides, bringing natural food for life inside it. Production of fish, prawn and crab is expected to increase by 2021. Khan said that the rains’ positive impact on marine life has been observed every alternate year.

Khan said that the industrial waste in liquid or solid form certainly disturbs the life in the sea. He lamented that approximately 500 million gallon tons of waste generally flows directly into the sea without being treated. “Toxic water is destroying our sea. But when it rains, the water, mud, sand and other organic materials flow into the sea, providing food to a number of species living in it,” he briefed.

WWF-Pakistan officials believe cities like Karachi are inundated by heavy rains due to ill planning. “The natural waterways are encroached upon and if the government wants to avoid destruction and disturbance, it should have proper planning,” Khan stressed.