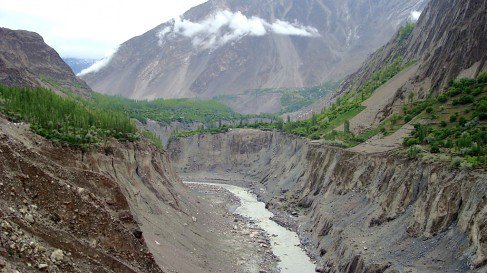 GILGIT: No one wants to imagine losing a child. No one inherently good would want to take a parent away from a child. But one family in Nagar, after suffering the former, had to make a decision to prove their grief wouldn’t turn them into the latter.

In the last week of July, Usman Saleem, a resident of Lahore, visited Hunza valley with his wife and two children. After spending a couple of memorable days in the serene environment of the valley in Gilgit-Baltistan (G-B), they decided to head back. While in the Chalat area of Nagar district during the return trip, his car collided with a motorcycle, killing Shayaan, 14, and Kashif, 22, on the spot.

The deceased, who were cousins, lived in Gilgit city, while their extended family was settled in the Chalat area. On that fateful day, the boys were out inviting their relatives to attend the marriage of Kashif’s elder brother.

“It was such a fateful day, I wish no one faced such tragedies in their lives,” Muzaffar Sawal, a relative, told The Express Tribune.

“We heard about the accident in the afternoon. Initially, we thought it was a rumour, but it wasn’t. Happiness turned into mourning.”

Sawal, another relative named Tajammul Agha, and some others left Gilgit for Chalat to bring the bodies back for burial.

On the way, he said, members of the group began hypothesising on what were the causes of the number of road accidents in the region. Some blamed tourists, who are generally unfamiliar with the narrow roads in G-B, while others blamed untrained and underage drivers, he added.

“When we finally got there, we came to know that it was the driver’s fault,” he said.

Sawal said that when the bodies were brought back by an ambulance at midnight on July 26, everyone present there cried. “The mothers of both boys fainted the moment they heard about the tragedy, and were admitted to a hospital,” Sawal explained.

Back in Chalat, Usman Saleem was arrested by the local police. While Saleem spent the night in the lock-up, his wife and children were provided food and accommodation by locals, upholding a local tradition.

When they heard what Saleem’s family was going through, the parents of the deceased boys pardoned them on the spot.

They even turned down an offer by Saleem to pay financial compensation to the victims’ heirs under Islamic laws.

Immediately after the boys were buried, Wilayat Ali, an uncle of the deceased, went to the Chalat police station where Saleem was being held and sought his release. “They were pardoned purely on humanitarian grounds. Though it all happened due to reckless driving, he never wanted to kill the innocent boys,” Wilayat said, explaining why the family forgave the man.

Picturesque G-B is famous for the hospitality local people show foreign and domestic tourists who throng the region in summer. But this particular incident is proof that the hospitality is not just a show, but something derived from the inherently beautiful spirit of the people.