NASA will contin­ue the work of the ‘Curios­ity’ rover, which has been explor­ing Mars since 2012
By AFP
Published: August 14, 2019
Tweet Email 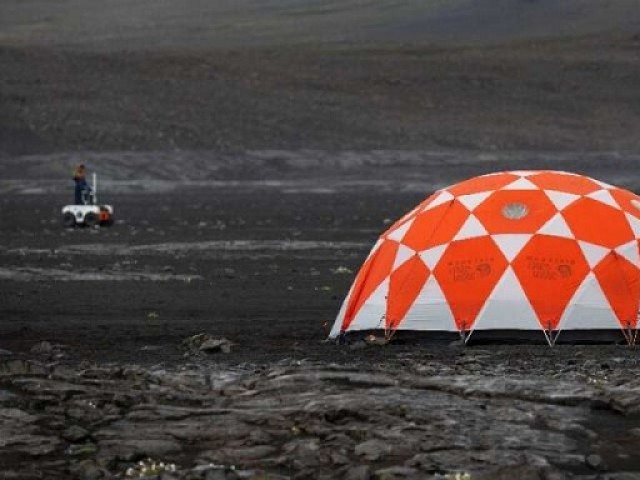 The sites are selected to study how the chemical composition and physical properties of the sand and rocks change. PHOTO: AFP

ISLANDE: To prepare for the next mission to Mars in 2020, The National Aeronautics and Space Administration (Nasa) has taken to the lava fields of Iceland to get its new robotic space explorer ready for the job.

With its black basalt sand, wind-swept dunes and craggy peaks, the Lambahraun lava field at the foot of Iceland’s second biggest glacier, Langjokull, was chosen as a stand-in for the Red Planet’s surface.

For three weeks, 15 scientists and engineers sent by the US space agency descended on the site, 100 kilometres (62 miles) from the capital, Reykjavik, last month to develop a prototype.

It will aim to continue the work of the ‘Curiosity’ rover, which has been exploring Mars since 2012 in search of signs of ancient life and making preparations for human exploration.

Experts say that Iceland, a volcanic island in the middle of the North Atlantic, is in many ways reminiscent of the fourth planet from the Sun.

The company has been commissioned by NASA to test a rover prototype as part of the SAND-E (Semi-Autonomous Navigation for Detrital Environments) project.

The prototype is a small, electric vehicle with white panels and an orange chassis.

It has a four-wheel drive propelled by two motors and is powered by 12 small car batteries stacked inside.

“This rover we have… (is) basically indestructible,” Deslauriers said.

“The rovers that we have on Mars and the Moon would be a lot more sensitive to the environment and conditions of Iceland.

“A Moon rover is completely unprepared for rain,” he added, just as a rain shower swept in.

Equipped with sensors, a computer, a dual-lens camera and controlled remotely, the rover moves its approximately 570 kilogrammes (1,257 pounds) at a leisurely speed of about 20 centimetres (7.9 inches) per second.

The speed needs to be slow to enable the rover to collect data and imagery properly, Mark Vandermeulen, a robotics engineer at Mission Control Space Services, said.

The meagre pace on the lava field is still two to four times faster than the speed it will be driving at its extraterrestrial destination.

Utilising its sensors and camera, the rover gathers and classifies data from its environment and sends back the findings to the engineers’ trailer.

The engineers then package the data and forward it to a tent where the scientists are huddled, to simulate how the data would be sent from Mars to Earth.

The rover exploring Iceland is just a prototype for the one that will be going to Mars next year.

That one, which has yet to be named, will also be able to collect samples and store them in tubes to be brought back to Earth by future missions.

As the prototype isn’t capable of doing this, researchers walk to the area studied, armed with radiometers and other equipment, to collect all the data samples that the finished rover would be able to do.

The sites are selected to study how the chemical composition and physical properties of the sand and rocks change as they move from the glacier to a nearby river.

Before Mars became an inhospitable frozen desert with an average temperature of minus 63 degrees C (minus 81.4 degrees F), scientists believe that the planet shared many of the characteristics of the subarctic island.

“The mineralogy in Iceland is very similar to what we would find on Mars,” Ryan Ewing, associate professor of geology at Texas A&M University, said.

In particular, Ewing referred to minerals such as olivine and pyroxenes, both dark so-called mafic rocks, which have also been found on Mars.

“In addition to that, we don’t have much vegetation, it’s cold and we have some of the environments like sand dunes and rivers and glaciers that Mars has evidence of in the past,” Ewing said.

Iceland has previously been used as a training ground for NASA missions.

During the Apollo mission years, 32 astronauts in the mid-1960s received geological training in the Askja lava fields and near the Krafla crater in the north of the country.

The setting allows NASA to test equipment and procedures, as well as the people performing them, in extreme environments while remaining on terra firma.

Mission Control says it is planning to return to Iceland next summer before the launch of the next Mars rover mission, scheduled between July 17 and August 5, 2020.