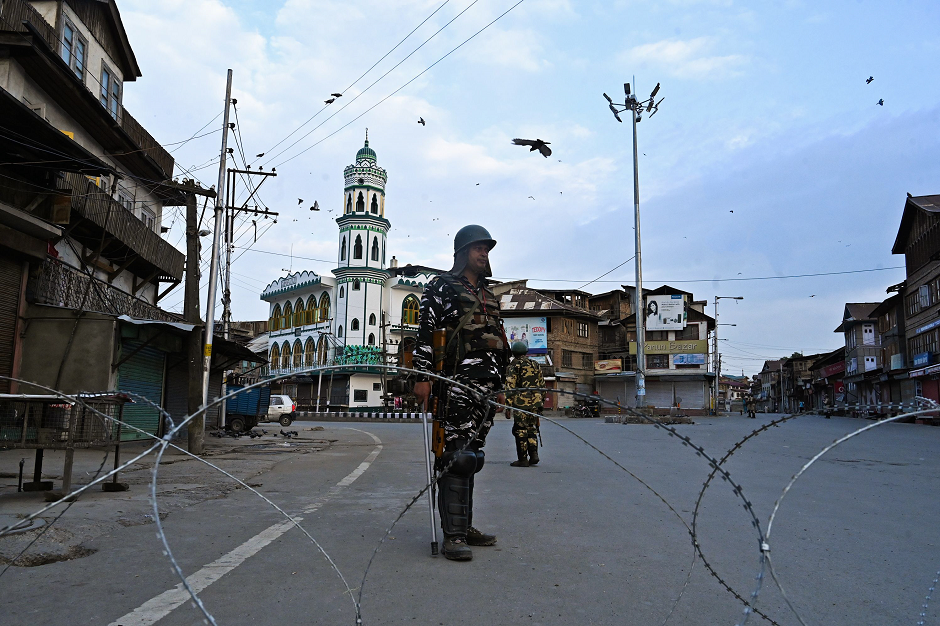 Security personnel stand guard on a street during a lockdown in Srinagar on August 12, 2019. PHOTO: AFP

NEW DELHI: Restrictions on freedom of movement in occupied Kashmir will be eased after India’s Independence Day on Thursday, the state governor has said, although phone lines and the internet will remain cut off.

Satya Pal Malik told Wednesday’s Times of India that communications will stay blocked as India’s government relaxes its clampdown since it stripped the region of its autonomy in early August.

“We don’t want to give that instrument to the enemy until things settle down,” Malik told the paper in an interview.

“In a week or 10 days, everything will be alright and we will gradually open lines of communication,” he said.

Fearing unrest, India snapped telecommunications and imposed a curfew in IoK on August 4, a day before its surprise presidential decree to strip the Muslim-majority region of its special status.

Tens of thousands of troop reinforcements have been deployed to the main city of Srinagar and other towns and villages, turning the picturesque city into a deserted warren of barbed wire and barricades.

The lockdown has not completely prevented protests, however.

According to residents around 8,000 people took part in a demonstration after Friday prayers, with security forces firing tear gas and pellet-firing shotguns to break up the rally.

On Tuesday the Indian government confirmed for the first time that clashes took place, blaming them on “miscreants” and saying its forces reacted with “restraint”.

For the Muslim festival of Eid on Monday the Himalayan region’s biggest mosque, the Jama Masjid, was ordered shut and people were only allowed to pray in smaller local mosques so that no big crowds could gather, witnesses said.

Footage filmed by AFP on Monday showed hundreds of people protesting in the Soura area of Srinagar, shouting slogans such as “We want freedom” and “India go back”.

Three helicopters continuously hovered over the area as protesters jeered and shook fists at the aircraft.

“What India has done is unacceptable to us. Our struggle will continue even if India keeps Kashmir locked down for months. Only solution is that India has to accept what Kashmiris want,” one protester told AFP.

India marks Independence Day, marking the end of British rule in 1947, on Thursday, a day after Pakistan.