US presid­ent hopes no one would be killed in Hong Kong amid new protes­ts cappin­g 10 weeks of unrest­
By AFP
Published: August 13, 2019
Tweet Email 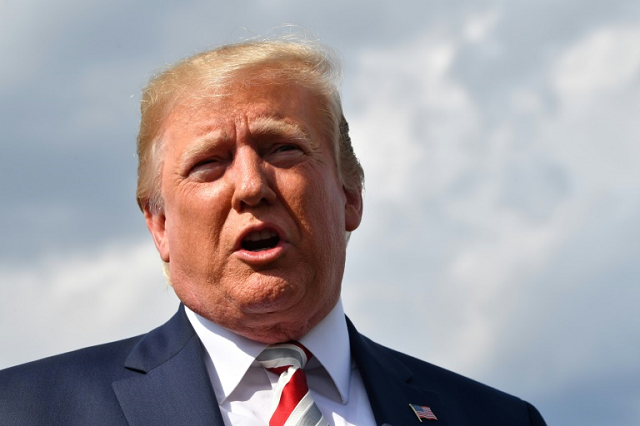 WASHINGTON: US intelligence has warned that China is moving troops to the border with Hong Kong, amid intensifying anti-government protests in the semi-autonomous financial hub, US President Donald Trump said on Tuesday.

“Our Intelligence has informed us that the Chinese Government is moving troops to the Border with Hong Kong. Everyone should be calm and safe!” Trump said in a tweet.

Moreover, the US president said that he hoped no one would be killed in Hong Kong amid new protests capping 10 weeks of unrest in the southern Chinese financial hub.

The crisis, which has seen millions of anti-government activists take to Hong Kong’s streets, was a “very tricky situation,” the president told reporters in New Jersey.

Hong Kong leader Carrie Lam said that the city’s recovery from protests that have swept the Asian financial hub could take a long time and that she would be responsible for rebuilding its economy “after the violence eases”.

Her comments followed serious developments in the growing crisis over the past week. Beijing said on Monday the protests had begun to show “sprouts of terrorism”, and the city’s airport was closed in an unprecedented move that forced hundreds of flight cancellations.

As she spoke to reporters, her voice cracking with emotion at one point, Hong Kong’s Hang Seng index fell by more than 1% to its lowest level since Jan. 4. The index was down around 1.5% soon after.

She said violence by protesters had pushed Hong Kong into “a state of panic and chaos”. “Hong Kong, as an open, free, very tolerant, economically stable city will see severe wounds … The recovery may take a long time,” she added.

VIDEO: Hundreds of flights have been cancelled or suspended at Hong Kong's airport as pro-democracy protesters staged a second day of hugely disruptive rallies, defying warnings from the city's leader who said they were heading down a "path of no return" #HongKongAirport pic.twitter.com/QnIj9ZVw5a