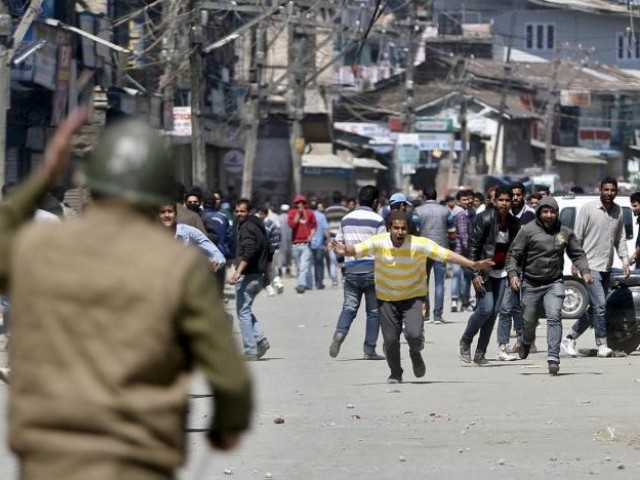 SRINAGAR: Homeowners and city workers were left to clean up Srinagar’s streets on Saturday, a day after police used tear gas and fired pellets to control a protest after Friday prayers over India’s withdrawal of special rights for the occupied territory, as a phone and internet blackout entered sixth straight day.

As reports of Friday’s protest – the largest since India’s clampdown – emerged, signs were visible in the Soura area of Srinagar on Saturday. Large rocks, wooden platforms, poles and boulders blocked the main street, and shops were shut. Protest graffiti, including calls for “Azadi” were visible.

At least 10,000 people were involved in the protest, based on an estimate provided by a police source and backed up by two eyewitnesses. Video footage carried by international news channels, the BBC and Al Jazeera and available online, appeared to show very large crowds protesting in Srinagar on Friday.

In the Bemina area of western Srinagar, around a dozen residents told Reuters that security forces had thrown stones and bricks at homes and cars in retaliation to the protests, breaking windows as a result.

“Why is India doing this to us?” said an elderly man, Mohammed Sultan, whose truck that he used to transport goods and earn a daily wage, was damaged.

Pointing to his two young grandsons, he said: “How do I do my work and feed these people now?”

Another woman screamed: “Is this how Modi is going to bring development to us?”

A Srinagar resident said: “It is still tough, everyone is closely watched.

“Our lives are still dominated by razor wire and checkpoints.”

In the curfew-smothered city, the occupation authorities had taken away even the freedom to mourn the dead.

“My greatest regret is that my father’s close relatives could not see his face one last time or perform his last rites,” said Irfan Ahmad Bhat, whose father passed away in Srinagar this week.

Bhat’s grief was compounded by the lockdown that not only prevented family members gathering to pay their respects, but also meant many could not be told he had died.

Bhat said he had only been able to inform four family members, who live in Srinagar that his 58-year-old father had passed away.

One doctor in the emergency department said there had been less than a tenth of the normal number of patients since the lockdown came into force. “People are afraid, anxious and in panic.”

For the first time in six days, India eased travel restrictions in some parts of Srinagar on Saturday, and people flooded the streets to buy provisions ahead of Eidul Azha.

But with public mobile, landline telephone and internet connections still severed, many people were struggling to make contact with relatives to plan the holiday.

Many people sought out the few policemen who have been provided with mobile phones. At a crossroads in Srinagar’s Nowhatta area, a police official said around 78 people had used his phone on Saturday to contact relatives outside the valley.

Inside a second-floor meeting room at Srinagar’s district administration office, more than 100 people crowded around two mobile phones to make calls. An official there said 354 people had registered their names to use the phones. “My serial number is 309, I do not know when I will be able to talk to them,” said, Babli, who rushed there to try to call her son and daughter, both in Delhi.

Big queues were also formed outside cash machines but huge numbers of troops remained on the streets, residents said.

“Bank machines are running out of cash so there are queues at every machine where notes may be available. People also need food for Eid,” said a resident.

International rights groups, including Amnesty International, have urged the Indian government to end the communications blackout.

The Editors Guild of India on Saturday issued a statement, saying it was impossible for journalists to cover developments without internet access.

Meanwhile, Kashmiri diaspora around the world, along with local supporters also protested against India’s clampdown in the occupied territory.

Hundreds of Pakistanis and Kashmiris, living in the UK, protested near the Indian consulate in Birmingham against the abrogation of the special status of the disputed Valley.

The protest, organised by Tehreek-e-Kashmir (TeK) UK, was joined by former MP George Galloway. He called for holding plebiscite in Kashmir. Later, the protesters submitted a resolution to the Indian consulate, demanding India to immediately lift the curfew in occupied Kashmir and stop human rights abuses in the region. Similar protests were also held in Berlin and Brussels.

Hundreds of American-Muslims came together in New York in an extraordinary demonstration of support and solidarity with the Kashmiri people.

Apart from Pakistanis and Kashmiris, those demonstrating in front of Indian consulate included Turks, Arabs, Bangladeshis, Bosnians, and local Americans.

Among the protesters were students from Columbia University. The rally, held under tight police security, was sponsored by “Stand with Kashmiris”, an umbrella body established, among others, by the Islamic Circle of North America (ICNA) and the Council of American Islamic Relations (ICNA).

Speakers at the rally called for the Indian government to immediately reinstate the protected status of the disputed state, lift the siege, and enter into peaceful negotiations to determine the future of occupied Kashmir in accordance with the UN resolutions.

Earlier, Kashmiris and Pakistanis, joined by Sikhs, staged a protest in front of the Indian mission to the United Nations. The demonstrators, who were carrying flags of Pakistan and Azad Kashmir, shouted slogans against Indian Prime Minister Modi and carried banners like “Kashmiris in Pain; India in Shame”.