Increa­se comes on back of surge in demand from invest­ors
By Salman Siddiqui
Published: August 11, 2019
Tweet Email 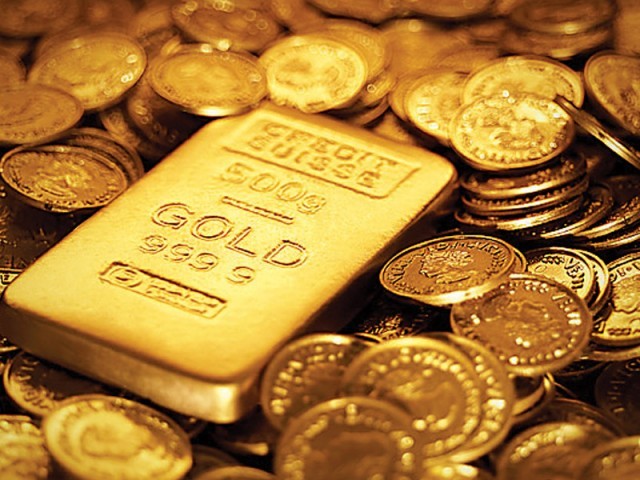 KARACHI: Gold continued to outshine on Saturday as it maintained the uptrend, hitting an all-time high for the fifth successive working day at Rs87,350 per tola (11.66 grams).

Cumulatively, the yellow metal has soared around 4%, or Rs3,350 per tola, in the past five sessions, including Rs350 per tola on Saturday, despite the international bullion market closing slightly down over the weekend on Friday.

“A surge in demand prompted us to increase the gold price (on Saturday),” All Sindh Saraf and Jewellers Association (ASSJA) President Haji Haroon Chand said while talking to The Express Tribune.

Gold prices are announced for the local bullion market six days a week – except for Sunday – keeping in view price movements in the London market and fluctuation in dollar’s value in domestic and international markets.

Earlier, the global market hit a six-year high of $1,510 per ounce on August 7 compared to $1,420 on July 27. “The uptick in demand suggests gold will maintain its uptrend when jewellers resume business after Eid holidays (Monday-Thursday),” Chand said.

“Market talk suggests the rupee will further lose its value against the US dollar after Eid holidays,” he said, adding that if the assumption came true, then the association may consider a further increase in the gold price.

World markets are also expected to bounce back due to the escalation in US-China trade tensions and the standoff between the US and Iran in the Middle East. Besides, Russia and China are aggressively buying gold ahead of likely depreciation in world currencies amid global economic slowdown, he said.

Rays Commodities Chief Operating Officer Adnan Agar said the other day that the safe haven status of gold invited euphoric buying in world markets after central banks either cut or prepared to cut the key interest rate to stimulate their respective economies in the wake of US-China trade war.