Trump has 'fanned the flames of white supremacy': Biden

Trump has 'fanned the flames of white supremacy': Biden 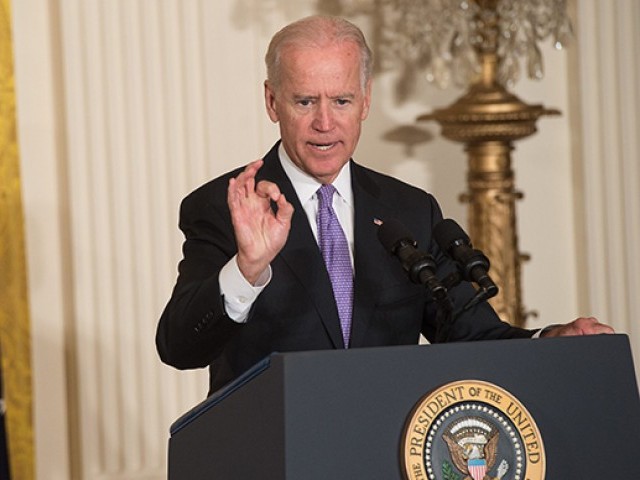 WASHINGTON: Joe Biden, the frontrunner in the race for the 2020 Democratic presidential nomination, lashed out at President Donald Trump on Wednesday, saying he has “fanned the flames of white supremacy.”

“We have a problem with this rising tide of white supremacy in America and we have a president who encourages and emboldens it,” Biden said at a campaign event in Burlington, Iowa.

“In both clear language and in code, this president has fanned the flames of white supremacy in this nation,” the 76-year-old former vice president said, using some of his harshest language yet about the Republican president.

Biden said Trump “offers no moral leadership” and shows “no interest in unifying the nation.”

“Instead we have a president with a toxic tongue who has publicly and unapologetically embraced a political strategy of hate, racism, and division,” he said.

Trump has been accused by his Democratic critics and others of promoting white nationalism with his frequent attacks on immigrants and minorities.

A 21-year-old white man killed 22 people in El Paso, Texas over the weekend in a mass shooting he said was carried out to repel a “Hispanic invasion.”

Biden laid some of the blame at Trump’s doorstep.

“How far is it from Trump’s saying this is ‘an invasion’ to the shooter in El Paso declaring ‘this attack is a response to the Hispanic invasion of Texas?'” Biden asked. “Not far at all.”

Biden cited the actions of past presidents and said they “chose to fight for what the best of American character is about.”

“We don’t have that today,” he said. “We have a president who has aligned himself with the darkest forces in this nation.

“And that makes winning the battle for the soul of this nation that much harder.”

Biden said America was going through a rare episode in its history with a president who “isn’t up to the moment, where our president lacks the moral authority to lead.”

New Jersey Senator Cory Booker, another 2020 Democratic hopeful, also denounced Trump on Wednesday, in a speech at a black church in Charleston, South Carolina, where nine black parishioners were shot dead in 2015 by a white supremacist.

Booker, one of two main African-American candidates in the race, said the United States was being led by a “president who spews hateful rhetoric and endangers the lives of people of color and immigrants.”

He said the El Paso attack “was sowed by those who spoke the same words the El Paso murderer did: warning of an ‘invasion.'”

“It was sowed by those who spoke of an ‘infestation,’ and ‘rats and rodents’ in majority-Black cities,” Booker added in a reference to Trump’s comments about the city of Baltimore.

Trump on Wednesday said he opposed “white supremacy or any other kind of supremacy” and accused Democrats of trying to score “political points.”

Tweeting while heading to El Paso for a condolence visit, Trump also said he watched Biden’s speech and declared it “Sooo Boring!”

“The LameStream Media will die in the ratings and clicks with this guy,” he said. “It will be over for them, not to mention the fact that our Country will do poorly with him.”