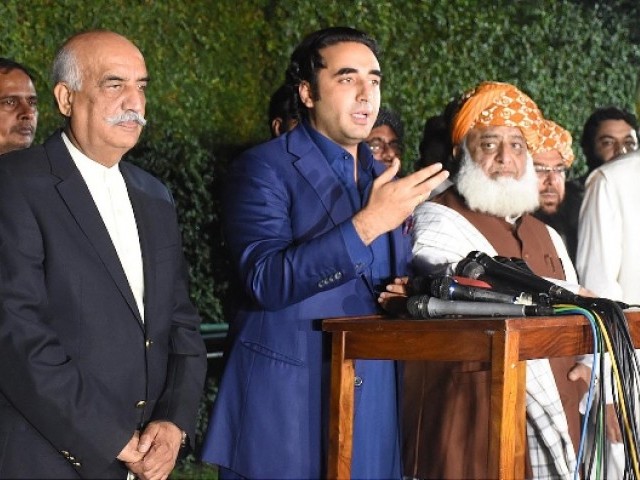 ISLAMABAD: Pakistan Peoples Party (PPP) Chairman Bilawal Bhutto Zardari and other party leaders met Pakistan Muslim League-Nawaz (PML-N) President Shehbaz Sharif on Wednesday in an effort to remove the misunderstandings that have developed between the two parties in the wake of the joint opposition’s failure to unseat the Senate chairman through a no-confidence motion.

Bilawal, accompanied by Sherry Rehman, Khursheed Shah and Naveed Qamar, reached the chamber of the opposition leader and were received at the entrance by Shehbaz himself.

After the meeting, Shehbaz told the media that he and Bilawal had primarily discussed the issue of Kashmir.

He added that a meeting of the joint opposition’s Rahbar Committee would be held soon and all matters would be discussed at an all parties conference.

Speaking to the media, Bilawal said the two sides had discussed important matters and Rahbar Committee would further review the issues.

“During times of dictatorship, it is necessary to jointly confront anti-democratic forces,” he added.

“The opposition leadership has exposed the government in the Senate.”

Jamiat Ulema-e-Islam-Fazl (JUI-F) chief Maulana Fazlur Rehman had recently spoken with Shehbaz and Bilawal on the phone in a bid to hold the opposition alliance together.

In his conversation with Bilawal, Fazl stressed the importance of the opposition parties to remain united after the “worst horse-trading” witnessed in their no-confidence motion against the Senate chairman.

The JUI-F chief also stressed the need for members of the opposition parties refraining from giving statements against each other.

Speaking with Shehbaz, the JUI-F chief said it was necessary to take action against the opposition senators who had betrayed their parties by voting against the no-trust motion.

The PML-N and PPP grew suspicious of each other following the joint opposition’s failure to unseat the Senate chairman through its no-confidence motion despite having a majority in the upper house of parliament.

The cracks laid bare when senior PML-N leader Khawaja Asif, during an interview on the Express News show ‘To The Point With Mansoor Ali Khan’, doubted the possibility of his party’s alliance with the PPP lasting for long.

“You will soon see fissures in the alliance. Mistrust between the two parties [PML-N and PPP] is growing and I think it will further increase in the coming days,” he maintained.

The PML-N leader also hinted that the PPP had betrayed the other opposition parties in the no-trust motion. “They [PPP]  don’t want to lose the Sindh government. We have nothing to lose.”

Asif also described the PPP senators’ move to submit their resignations to the party chairman as a “political gimmick”.

“To be honest, this is nothing. I will believe it when they actually step down as senators,” he added.

In response, PPP’s Senator Sherry Rehman expressed her disappointment and said Asif’s comments were tantamount to “smashing the opposition alliance into pieces”.

She sought an explanation from the PML-N over its senior leader’s remarks.

“The PPP too has its reservations [over the policies of other opposition parties] but never expressed them openly to keep the alliance intact,” she claimed.

“The PPP entered into an alliance with the PML-N for the sake of democracy even though its activists were unhappy about it,” she said.
“The PML-N itself has been unable to keep its senators in check.”