Those of you who are bachel­ors need not worry anymor­e, says Vikram Saini in viral video
By News Desk
Published: August 7, 2019
Tweet Email 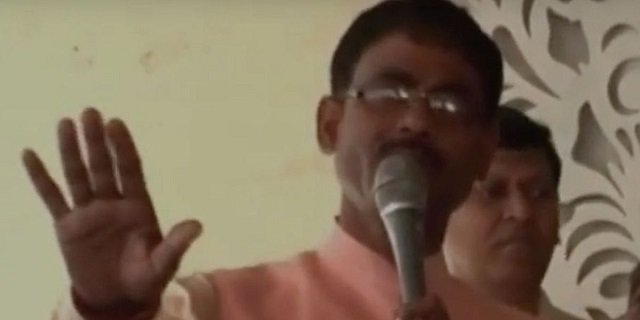 Those of you who are bachelors need not worry anymore, says Vikram Saini in viral video. SCREENGRAB: THE WIRE

A lawmaker of the ruling Bharatiya Janata Party (BJP) has landed himself in hot water after a video of him saying that party workers could now marry fair women from Indian Occupied Kashmir (IOK) went viral.

According to NDTV, Vikram Saini, an Uttar Pradesh legislator, who is no stranger to controversy, made the misogynistic statements which were caught on camera.

“With the government’s Kashmir decision, BJP workers could now go there, buy plots of land and get married,” he said at a function at Muzaffarnagar to celebrate the move.

“The workers are very excited and those who are bachelors can get married there. There is no issue now. Earlier, there was lot of atrocities on women. If a woman from IOK got married to a man from Uttar Pradesh, her citizenship would be revoked. There was different citizenship for India and IOK,” the lawmaker said.

Asked about his misogynistic statement later, the lawmaker, quite unrepentant, said there was nothing objectionable in what he said.

“Now anyone can get married to a Kashmiri girl without any issue. That is all I said and it is the truth. This is freedom for the people of IOK. That is why we organised the event. Now, Kashmiris have attained freedom,” Vikram Saini said.

“Modiji has fulfilled our dream. The whole country is celebrating the move.”

Earlier this year, Saini, who represents the Khatauli assembly constituency, had gained much notoriety with his threat to “bomb” those who felt unsafe in India.

BJP MP from UP Vikram Saini says people in India are very happy – especially bachelors – because they can marry 'gori' Kashmiri girls pic.twitter.com/W1i1uhgtLe