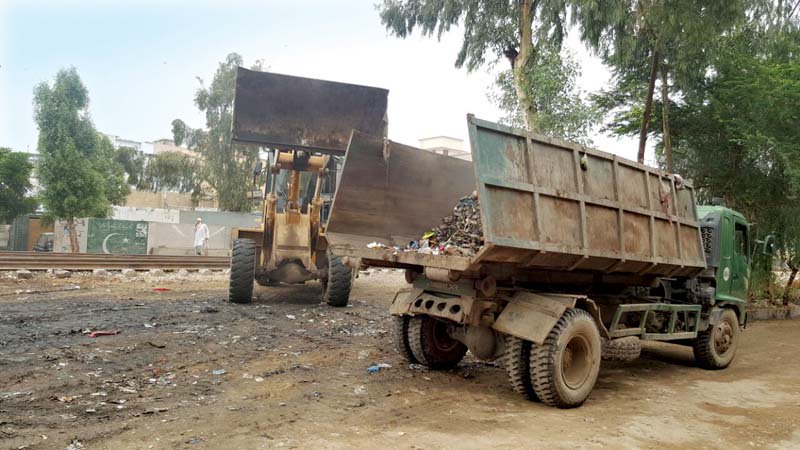 The minister along with Karachi Mayor Wasim Akhtar officially launched the drive on Sunday at the Karachi Port Trust office but failed to come up with a solid mechanism till Tuesday. PHOTO: EXPRESS

KARACHI: The two-week-long ‘Clean Karachi’ drive launched by Syed Ali Haider Zaidi, the federal minister for Maritime Affairs, has not begun yet. Instead of cleaning drains, the federal minister has asked for donations to support the initiative. He claims the campaign needs Rs1.75 billion over a period of 90 days.

The minister along with Karachi Mayor Wasim Akhtar officially launched the drive on Sunday at the Karachi Port Trust office but failed to come up with a solid mechanism till Tuesday.

The mechanism of cleaning the streets and roads and lifting garbage is divided between different agencies. The Karachi Municipal Corporation (KMC) has taken the sole responsibility of cleaning main roads and major drains of the city.

District Municipal Corporations (DMCs) are to look after streets, roads and small drains in their respective jurisdictions. Meanwhile, 17 land controlling agencies, including six cantonment boards, would look after the issues pertaining to cleaning and lifting of garbage in their jurisdictions.

Officials say nearly 13,000 tons of garbage is thrown out in the city daily but hardly 70 per cent of it reaches the landfill sites. The collectors usually dump the garbage in drains that ultimately chokes them.

Zaidi received tremendous support from the people of Karachi and he assured them that he knew how things would be fixed. However, the very next day after the inauguration of the drive, the federal minister asked people to donate funds for the drive.