Citize­ns asked to plant at least two saplin­gs each on August 18
By ​ Our Correspondent
Published: August 5, 2019
Tweet Email 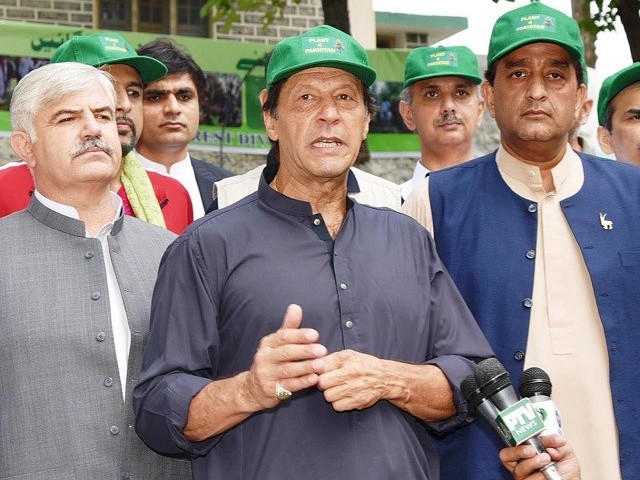 ISLAMABAD.: Prime Minister Imran Khan on Monday said increasing Pakistan’s forest cover was essential to save it from the imminent disaster of climate change, while urging citizens to take part in the nationwide tree plantation drive.

“Plantation is not an option, but a necessity to save the country for future generations,” he said at the launch of the monsoon tree plantation campaign at Shakarparian.

Addressing a gathering with an overwhelming majority of schoolchildren, he said that the country’s youth must become part of the drive to avert the dangers posed by climate change, including high temperatures, glacial melting and desertification.

The prime minister announced that August 18 would be marked as ‘Plant for Pakistan’ day, where citizens, government departments and the armed forces would plant trees as a gesture of caring for the country.

“Together, we will make effort to reverse the ills of climate change by persistently planting trees for the next four years,” he said.

He asked the schoolchildren to make a pledge to plant at least two saplings each on August 18, which they affirmed by loud, enthusiastic cheers.

The prime minister said high pollution in big cities was leading to health risks such as lung infection and mentioned that in Lahore alone, the area covered by trees had been reduced to five per cent as compared to that in 1990s.

Prime Minister Khan mentioned that the provincial government of Pakistan Tehreek-e-Insaf (PTI) in Khyber-Pakhtunkhwa (K-P) increased forest cover by six per cent during five years, which was also acknowledged by international organisations.

“By turning Pakistan green, we can emerge as an exemplary state. Our Clean and Green Pakistan initiative in K-P has received global acclamation. The Forest and Agriculture Department based in Rome has acknowledged K-P efforts of increasing six per cent forest coverage. We did it with dedication, and with fewer funds,” said the premier.

Shedding light on the efforts of the K-P government to achieve the objective, the PM shared that 10 officials of the forest department had embraced martyrdom to uproot the most powerful timber mafia prevalent in KP.

Earlier, the PM also planted a pine sapling at the venue.

Federal Minister and Adviser to PM on Climate Change Malik Amin Aslam said that for the first time in the country’s history, the concept of urban forestry was taking root through public-private partnership and with the support of civil society organisations.

“Almost 200,000 saplings have been distributed free of cost at 30 points in Islamabad on Monday under the monsoon plantation campaign, whereas 10,000 have been planted over an area of 100 acres in one day,” said Aslam.

He added that 900 acres of land had been recovered at Maragalla hills for forestation.

In July, the federal government had set a target of planting 140 million saplings across the country during the campaign that began in the first week of August.

Earlier this year, the Ministry of Climate Change planted around 95 million saplings across the country under the “Plant for Pakistan” programme.