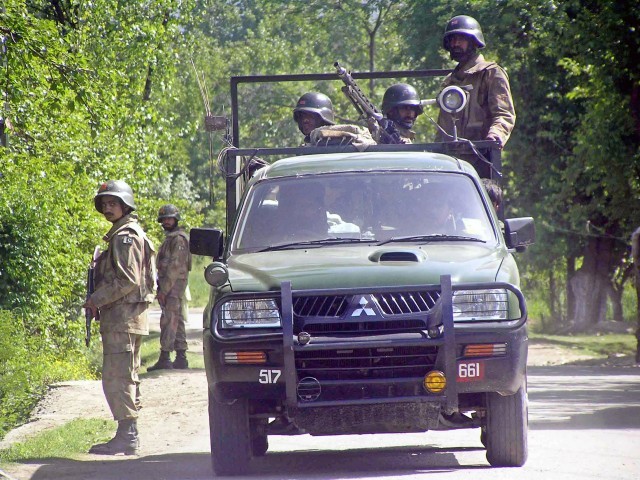 A bomb attack killed three soldiers and wounded another 15 on Tuesday, striking a military convoy in North Waziristan. PHOTO: FILE

The officials said the bomb was detonated by remote-control near Miranshah, the main town in the tribal district.

The device exploded soon after the convoy left for the town of Datta Khel, ripping through a truck carrying army and paramilitary troops.

“Three soldiers were killed and 15 wounded,” an intelligence official told AFP on condition of anonymity.

Another security official in the main northwestern city of Peshawar confirmed the attack and the casualties.

The bomb was planted in a drain near the market in Miranshah and exploded at a time when authorities had imposed a routine curfew so the military convoy could go past, the second official said.

In the neighbouring district of South Waziristan, a paramilitary soldier was killed when Taliban militants attacked a checkpost in the Makeen area, security officials in the main northwestern city of Peshawar said.

In another incident, three people of a family were killed when a mortar landed into a house in the Kurram Agency.

The incident took place in the Pewar Tangi area.

An explosion took place near an official security checkpost in the Charwagai area of Landi Kotal on Tuesday. No loss of life was reported.

Another explosive device that was set up outside a school on the Landi Kotal bypass was defused by the Bomb Disposal Squad.

Official sources said that the bombers were targeting the Ali Public School in the area.