Imran Khan had a more comple­x agenda in mind when he sat down with Donald Trump in the White House
By Shahid Javed Burki
Published: August 5, 2019
Tweet Email 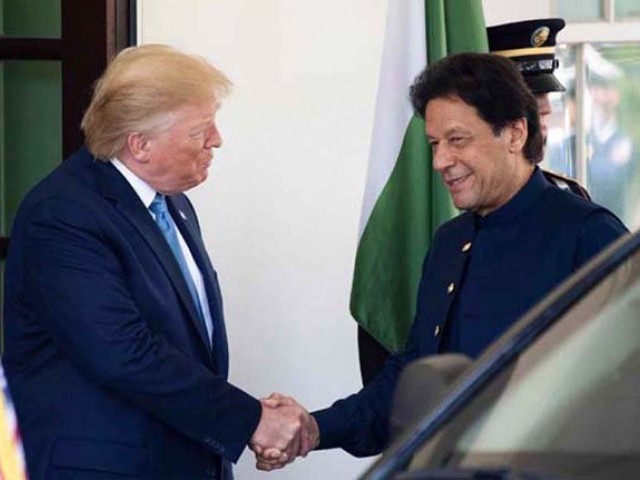 In this series of articles, the first of which appears today, I will provide my read on the significance of Prime Minister Imran Khan’s recent visit to the United States.

The context for this visit was very different from that in more than two score visits by the previous heads of the Pakistani state. Imran Khan’s visit to Washington was the 22nd time a Pakistani head of state had gone to the United States. Of the previous visits, seven were made by the country’s military presidents.

As I will discuss in a later article, the men in uniform went to Washington with two objectives: to strengthen the military and to obtain American assistance to improve Pakistan’s economic performance, whereas Imran Khan had a more complex agenda in mind when he sat down with Donald Trump in the White House.

Saudi Arabia and Iran probably did not figure in the Trump-Khan conversations, but they should have. The two countries are at the opposite ends of the Islamic political spectrum. It is not only religion that has created what appears to be an insurmountable gulf between these two Muslim nations, one Sunni and the other Shiite. They are also poles apart politically.

Saudi Arabia is a monarchy with practically no participation of the people in determining the way they are governed. Iran, on the other hand, is following what it sees as an Islamic system, in which power is in the hands of the clergy that also looks at an elected parliament for advice and guidance.

There is a delicate sharing of power between the Supreme Leader chosen by a group of Islamic scholars and the president who is elected by Parliament and reports to it as well as to the Supreme Leader. Pakistan represents the third way; one that, in the long run, is more viable in the sense that that it has the potential to satisfy the aspirations of its very young population. These aspirations put Imran Khan and his Pakistan Tehreek-e-Insaf party in power in Islamabad, Lahore and Peshawar.

I am sure the Islamic world’s demographic situation did not come up for discussion in Imran Khan’s conversations in Washington. But policymakers in Washington and other western capitals need to understand what is happening demographically in the Muslim world.

In the western part of this stretch of land that extends from Morocco in the West to Pakistan in the East, demographic transition that has occurred in other parts of the world has yet to happen.

Birth rates remain high, which means that the populations are very young. Half of the population is below the age of 25 years. The youth are restive and they want to have a say in the way they are governed. They have often rebelled against authoritarian rule, which in most cases has been rule by the military. This is what brought the Arab Spring of 2011 to many Arab lands and is keeping several countries on the political edge.

Imran Khan had taken two men in uniform with him to convey the message that Pakistan was a Muslim country that had found a way for governing with people’s participation. The elections of July 2018 had demonstrated that it was possible for a Muslim nation to adopt a participatory system of governance.

This was done without the kind of struggle that is going on in other Muslim states such as Algeria, Tunisia, Libya and Yemen. This struggle has taken the heaviest toll in Syria. Pakistan, on the other hand, had successfully used elections to transfer power from one political group to another. It didn’t need to use the street to bring that about.

In order to appreciate the full significance of the Prime Minister’s US visit, we should put it in the historical context. Pakistan’s relations with the United States were dictated by the interests of the country’s military. Reading the content and substance of Imran Khan’s Washington visit; it appears to me that this time around the civilian head of state was in the driver’s seat.

He was accompanied by the heads of the Pakistan Army and the military’s intelligence services, but there was little doubt that the Prime Minister was in control. I will begin this assessment of the Prime Minister’s Washington visit by a quick recounting of the visits to the American capital by the civilian heads of state.

The series of heads of state visits began with Liaquat Ali Khan, Pakistan’s first prime minister. He had invitations from both the Soviet Union and the United States to meet with their leaders. Liaquat chose to call on then US president, Harry Truman.

At that time, Pakistan was in a desperate financial situation especially after the harsh treatment meted out to it by India, its sister state. Jawaharlal Nehru was the Indian prime minister then, and he and the senior leaders of the Congress Party had still not reconciled with the creation of the predominantly Muslim Pakistan out of the British Indian colony.

New Delhi had taken several steps to economically cripple Pakistan. These included the blockade of foreign funds — the so-called Sterling Balances — that the British had left for Pakistan with the Reserve Bank of India, the Indian central bank. These were to be released to Pakistan once it had established its own central bank, but Nehru refused to comply.

In 1949, India launched a trade war with Pakistan, stopping the flow of all goods and commodities between the two countries. At that time, more than two-thirds of Pakistan’s exports and imports went to or came from India. It was only the war in Korea that catapulted the demand for Pakistani raw materials — jute, cotton and leather — that provided the country much-needed financial relief. Nehru and his colleagues had hoped that a crippled Pakistan would plead for reentry into the Indian Union, thus fulfilling the dream for Akhand Hindustan.

Both were from Bengal, then a province of Pakistan. There were multiple visits by some Pakistani leaders. Ayub Khan went to Washington twice as did Zulfikar Ali Bhutto, His daughter Benazir Bhutto also made two trips as did Nawaz Sharif. All the visits were aimed at moving Pakistan into the American orbit and thus balance India’s continuing hostility towards its struggling predominantly Muslim state.

Of news: good and bad!