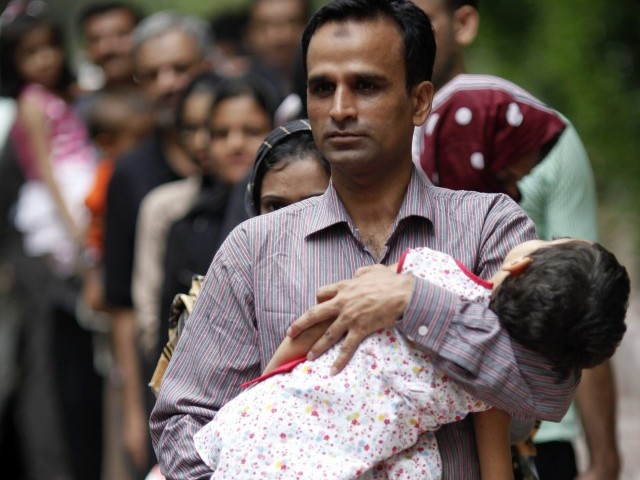 A Pakistani refugee who is a member of the Ahmadiyya, an Islamic minority sect, carries his daughter as he is released from a detention centre in Bangkok June 6, 2011. PHOTO: REUTERS/ FILE

Irfanul Mulk may have been able to find temporary shelter in Thailand, but those who forced him out of Pakistan are now flexing their muscles to bring him back.

Irfan, 27, left his village Taban in Punjab’s Sheikhupura district after he and his two brothers Furqanul Mulk, 21, and Umer Sultan, 31, were held under Pakistan Penal Code’s Section 298-C which prohibits Ahmadis from calling themselves Muslim or “in any manner whatsoever outrages the religious feelings of Muslims”. A police case was lodged against them but residents refused to calm down, and the three men decided to leave the country.

“When people of the village learnt about our detention and asylum applications, they approached the Sheikhupura District police chief and submitted an application seeking our repatriation to Pakistan calling us traitors who had maligned the country abroad,” Irfan told The Express Tribune.

Since then, the police have raided their home several times and their elder brother Haider Sultan, who stayed back in Pakistan, is facing constant threats.

Representatives of the Tehrik-i-Khatm-i-Nubuwat, an organisation that has repeatedly attacked the Ahmadiyya community for its religious beliefs, have even written to the US Embassy in Pakistan, warning them against giving American nationality to Irfan and his brothers.

But while Irfan and his brothers had to suffer at the hands of their neighbours, there are others who have been persecuted by their own families.

Syed Altaf Hussain Bukhari, the grandson of a renowned pir* whose shrine is located on the outskirts of Islamabad, moved to Thailand in November 2010 with his wife Sadia and their two children. They were forced to flee after his family cut off ties with them for having converted in 1996 to the Ahmadi faith and even subjected him to physical torture.

“When I announced that I was becoming an Ahmadi, my brothers and a cousin, who was the caretaker of the shrine at that point, immediately denounced their relationship with me,” he said. His brothers started telling followers that he was not their real brother as their father had adopted him. Pamphlets bearing his photograph were distributed in Sheikhupura, calling him liable to be murdered.

To protect his wife and children, Altaf, who survived the deadly attacks on Ahmadiyya worship places in Lahore in May 2010, left his ancestral village to move to Sheikhupura and eventually, in 2003, he moved to Lahore where they went into hiding.

Once his people back home learnt that he was seeking asylum in Thailand, they started threatening his father-in-law as well.

Shahid Mehmood, who fled from Multan where he had an established business, said that he had witnessed the beheading of two Ahmadi doctors in March 2009 and insisted on registering an FIR against a pir for instigating his followers to murder Ahmadis. “His followers would visit my shop daily and try to persuade me to withdraw the case,” says Mehmood. “I went to three senior police officers who threw the file in my face and told me that they were followers of [the pir] and could not dare to proceed against him.”

But after another Ahmadi man Rana Ataul Kareem was murdered in August 2009 and the case was traced back to the pir, Mehmood started to receive threats. In September 2010, Mehmood, his wife and four children, arrived in Bangkok.

Back home, Mehmood’s shops have been closed and his house has been sealed.

Many families decided to send younger members abroad while parents stayed back. Aamir Ali, 22, left his village Pasrur in Punjab’s Sialkot district along with his three sisters. But after news of them seeking asylum spread, villagers started to taunt their mother, who has had to regularly switch homes.

*The name of the pir is being withheld on the request of Bukhari.