Minist­er says potent­ial astron­auts will be select­ed by PAF from its pool of fighte­r pilots­
By Saqib Virk
Published: August 1, 2019
Tweet Email 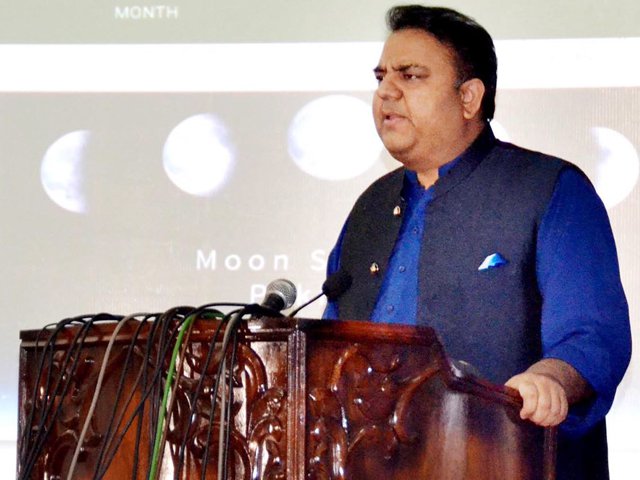 Minister of Science and Technology Fawad Chaudhry launches moon sighting website at a ceremony in Lahore on Sunday. PHOTO: INP

Last week, Science and Technology Minister Fawad Chaudhry generated quite some buzz and a whole lot of questions when he announced plans to launch Pakistan’s first manned space mission in 2022.

“Proud to announce that selection process for the first Pakistani to be sent to Space shall begin from Feb 2020, fifty people will be shortlisted — list will then come down to 25 and in 2022 we will send our first person to space, this will be the biggest space event of our history,” he tweeted.

Naturally, many across the country were curious as to how serious the minister was, whether he was outlining more than a vague vision to generate interest in his ministry and if he was, just how would the country go about executing such a complex and costly endeavour.

In an exclusive interview with The Express Tribune, Fawad provided much-needed clarity on the surprise announcement of the 2022 manned space mission and the revamp of Pakistan’s space programme.

To begin with, the minister downplayed potential hurdles and challenges that the country might face as it sets out to launch a person into outer space.

“Yes, launching even a satellite is costly,” he admitted. “But there is no difficulty now as the mission that we are planning is a collaborative one with China.”

“Although several factors, such as procurement and development of necessary infrastructure and technology will determine the final cost of the programme, with Beijing’s help and a few million dollars, we should be able to achieve our objective,” he said with confidence.

Fawad pointed out that the planned 2022 mission would be the culmination of the space policy Pakistan’s national space agency, Space and Upper Atmosphere Research Commission (Suparco) outlined in 2002. According to him, an agreement with China in line with the policy was reached in 2015.

“Our government, upon coming to power, decided to take this policy to fruition. We will complete the vision Suparco outlined 17 years ago and send the first Pakistani to space,” he said.

Suparco and the Pakistan Air Force would carry out the mission jointly, Fawad elaborated. “In accordance with international practice when it comes to space programmes, the individuals shortlisted for the mission will be selected by PAF from its pool of fighter pilots,” he said.

“Astronauts all over the world generally have an air force background. Air force pilots are understood to have the necessary fitness, training and experience for such missions and as such, are considered optimal candidates,” the minister explained. He added that once PAF has selected the potential astronauts, Suparco would complete work on other projects associated with the 2022 mission.

“We were the second Asian country after the then Soviet Union to launch a space programme. We launched ours in 1962 under Dr Abdus Salam’s guidance,” he pointed out. “Sadly our governments did not take much interest in it. There are countries that have reached Mars since, but we have lagged behind.”

Fawad expressed hope to turn this situation around. “Since 2002, fast-paced development has been taking place in Pakistan’s space programme. It should reach an advanced stage by 2030.”

Talking about the utility of a space programme, especially at a time when the country is experiencing a financial crunch, the minister stressed that developing it would directly benefit other sectors. “A space programme is absolutely vital if we are to progress, particularly in various technological fields like defence, energy and even agriculture,” he said.

Cautiously noting that anything could happen at the eleventh hour – “Even India’s space programme got delayed,” he pointed out – Fawad said that everyone involved in the programme was prepared and hoped that the 2022 mission would launch as scheduled.

Although Suparco has released no details about the space mission, sources in the science and technology ministry told The Express Tribune that the plan was discussed prior to Fawad’s tweet in a meeting held at an undisclosed location that the minister participated in.

How conspiracy theories followed man to the Moon

According to sources, while Suparco has the capacity to build satellites, it is dependant on launch facilities in China. The Express Tribune attempted to reach out to Suparco for further details on the 2022 mission but received no response till the filing of this report.

According to the 2015 Pakistan-China space agreement, both countries will jointly conduct scientific research and experimental development and will cooperate on astronaut training and sending space missions. The China National Space Administration (CNSA) and Suparco will establish a Pakistan-China space committee, presided over by the heads of both space agencies, which will design collaborative space ventures.