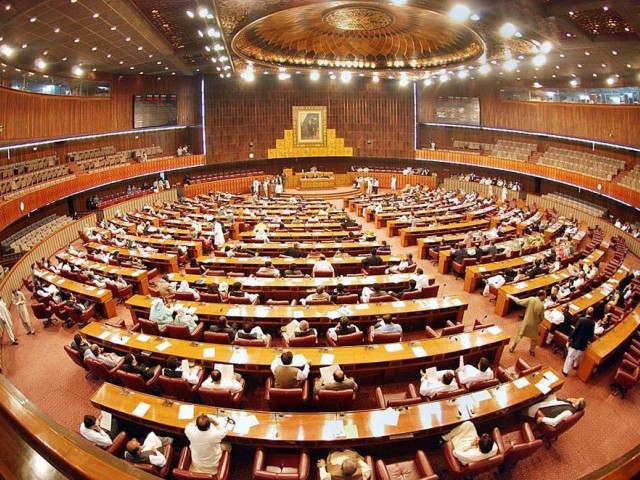 ISLAMABAD:  A National Assembly panel on Tuesday approved amendments in money laundering and foreign exchange regulations laws, helping the government to step closer to meet a requirement of Financial Action Task Force ahead of final showdown in September.

If finally approved by the Parliament, the State Bank of Pakistan’s permission will be mandatory for inland movement of foreign exchange valuing more than $10,000 by an individual, according to the bill passed by the National Assembly Standing Committee on Finance.

It is for the first time that the central bank has been given powers to regulate inland movement of foreign currency to curb money laundering. In case of violation, the law enforcement agencies will be authorized to confiscate the currency and arrest the currency holders.

The National Assembly Standing Committee on Finance and Revenue approved the Foreign Exchange Regulations (Amendment) Bill 2019 and Anti Money Laundering (Amendment) Bill 2019 with certain amendments aimed at addressing legal deficiencies pointed out by the FATF.
The hanging sword of FATF

The violation of the FERA law will involve “rigorous imprisonment for a term of up to five years or fine or both”.

The amendments in Foreign Exchange Regulation Act (FERA), 1947 and the Anti-Money Laundering Act (AML), 2010 have been approved by the lower house of the Parliament ahead of FATF plenary meeting in September. PTI’s MNA Asad Umar chaired the standing committee meeting.

However, the government will have to get these bills passed from the opposition-controlled Senate Standing Committee on Finance, which will be an uphill task in a charged political environment.

“Pakistan is asked by the FATF to live up to standards, which no one in the world is able to meet,” said Asad Umar while commenting on the harsh conditions of the FATF.

The global body working to curb money laundering and terrorism financing has placed Pakistan on grey list since February last year. In September, the FATF will take a decision about whether to further keep Pakistan on its watch list.

The government agreed to introduce a minimum threshold for inland movement of currency on the recommendation of the standing committee.

The members had apprehended that the discretionary powers awarded to the central bank to set the limit might be misused against the political opponents.

According to the amended clause, people would not need central bank’s permission for carrying up to $10,000.

“The government is overdoing things under the garb of FATF, as there was no relation between the FATF requirements and inland movement of currency,” said Dr Ayesha Ghaus Pasha of Pakistan Muslim League-Nawaz (PML-N).

At present, the central bank does not have explicit powers under FERA 1947 to issue any regulations relating to inland movement of foreign currencies.

“The restrictions on inland movement of currency have been proposed to end the business of Hawala and Hundi, which is also a source of money laundering,” said Bashir Memon, Director General of Federal Investigation Agency.

The proposed bill also makes it binding for the tribunals to order confiscation of currency, gold, silver or other properties. In the original bill, it was the discretion of the tribunals whether to confiscate assets or not.

“Now, it will be mandatory for the courts to order confiscation of assets.

In the Rs16 billion case of money laundering by a licensed exchange company, the court did not order confiscation of the asset,” said Memon, while explaining the rationale for mandatory confiscation of assets by tribunals.

PPP MNAs Syed Naveed Qamar and Dr Nafisa Shah objected to placing limits on the discretion of the courts.

The standing committee also approved the AML Amendment Bill 2019. Under the new bill, the money laundering will be punishable with rigorous imprisonment of up to 10 years, as against the current from one year to 10 years.

According to another amendment, the government has surrendered the federal cabinet powers to approve bilateral agreements between the Financial Intelligence Units.

Director General Financial Monitoring Unit Mansoor Siddiqui said that the amendment was suggested by the Egmont Group –an informal networking of the 159 FIUs.

According to another amendment, the financial institutions will be bound to promptly share information on money laundering with FMU, as against the current limit of seven days.

The government conceded to the standing committee’s demand about linking the arrest of the suspects in money laundering cases with the arrest warrants issued by the courts.

The government wanted to give sweeping powers to investigation officer to arrest a person without seeking warrants from the court. The legislators belonging to all political parties had opposed the government’s amendment.

Under the newly approved bill, the money laundering will now be a non-bail able offense.

The standing committee also approved to empower the investigation officers to attach property involved in money laundering for six months as against the current period of three months.

It is proposed that the courts could grant further extension in the attachment period of up to one year.

According to the proposals, the banks would also be bound to file suspicious transactions report and on failing to do so, the persons concerned will be liable to five years of imprisonment and a fine of Rs500,000.

It will also be mandatory to keep the record of suspicious transactions for 10 years, which is double the current period.

CNIC condition to come into effect from August