Bridge­s and roads washed away in Chitra­l and Kohist­an as severa­l houses also suffer damage­
By Our Correspondents
Published: July 30, 2019
Tweet Email 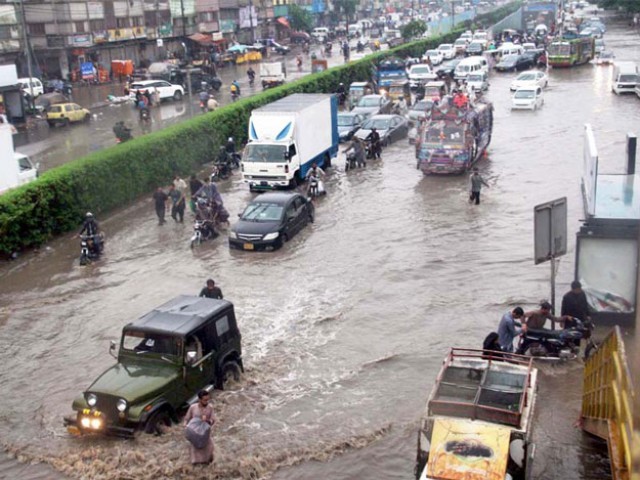 PESHAWAR: At least 10 people died while 29 others were injured during the five days of torrential rains in Khyber Pakhtunkhwa (K-P), stated a report released on Monday by the provincial disaster management body on the devastation wrought by the monsoon rains.

Meanwhile, fresh flooding and torrential rains have washed away roads and bridges in different parts of the province.

According to the Provincial Disaster Management Authority (PDMA) report, those killed included five children and a woman, including three who hailed from Buner and three from Shangla  Two others from Mansehra district also perished while one each from Abbottabad and South Waziristan also fell victim to rain-related incidents.

The report stated that as many as 29 people were injured while 27 animals also perished. Similarly, nine houses were completely destroyed owing to storms and hill torrents while 16 houses were partially damaged during torrential rains.

Of the 28 districts in the province, 10 were declared as rain-affected, the report said.

Raging waters in Chitral washed away another bridge, this time in the Parksap area of the mountainous valley. The floodwaters also damaged water supply lines in the area.

The local chapter of the PDMA said that owing to heavy rains in the Parksap area of Upper Chitral, hill torrents and floods washed away a bridge and a water supply line.

As a result, the land route connecting Parksap to the rest of the district was also cut off and the area now presented the look of a lake.

On receipt of information that the road had been washed away, the PDMA and district administration dispatched heavy machinery to clear a path.

Further, a flood advisory has been issued in which people living on the banks of the river in Darosh have been urged to temporarily relocate to safer areas.

Rescue 1122 and PDMA said that water levels in the Chitral and Kabul rivers have been consistently increasing owing to monsoon rains and some glacial lake outburst floods (GLOFs).

They added that owing to the torrential rains, three houses have been damaged in Torakh Tehsil, while in Gorghar, floods damaged six houses.

In the Chapparplan area of Kohistan, a bridge was damaged due to flooding, cutting off the adjoining areas.

Officials said that rescue officials are working to restore communication routes in these areas.

A monsoon emergency control room has been set up in the offices of the Malakand Deputy Commissioner Office to coordinate rescue and relief missions. To deal with possible flood situation, the heads of all relevant institutions have been given specific instructions by the Malakand Deputy Commissioner Iqbal Hussain to take concrete steps to protect the lives and property of residents.