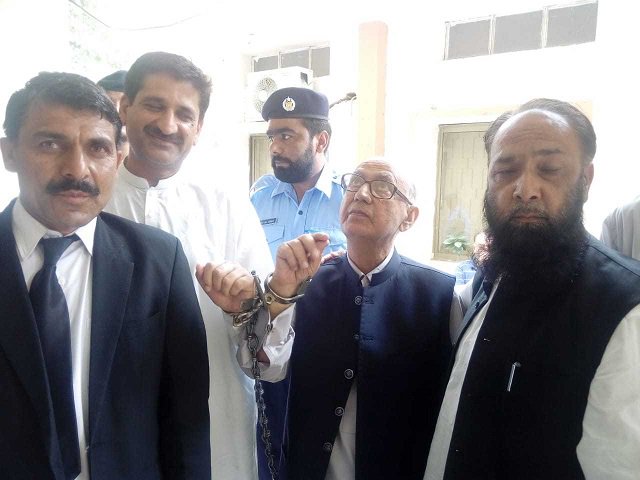 ISLAMABAD: Irfan Siddiqui, an adviser to former prime minister Nawaz Sharif, was sent to Adiala Jail on a 14-day judicial remand in a case related to violation of tenancy laws.

The veteran columnist was arrested a little before Friday midnight on the charge that he violated provisions of the tenancy law by failing to inform police before renting out his house.

The tenant, identified as Javed Iqbal, was also arrested and a case under Section 188 of the Pakistan Penal Code – a bailable offence – was registered against the two at Ramna police station.

On Saturday morning, the duo was presented in handcuffs in the court of Magistrate Mehreen Baloch, who sent them on a two-week judicial remand.

Immediately after the remand, Siddiqui’s lawyer filed an appeal for post-arrest bail which would be heard on July 29.

Party vice president Maryam Nawaz Sharif termed the arrest a “baseless and absurd” act by the government, while former interior minister Ahsan Iqbal referred to it as “abduction” by government agencies.

Strongly condemn abduction of senior and elderly journalist Irfan Siddiqui by the government agencies. No to Fascism in Pakistan

PML-N spokesperson Marriyum Aurangzeb claimed the case against Siddiqui was fake and demanded his immediate release.

She said the tenancy agreement was not under Siddiqui’s name and the arrest was made on the basis of false information, as the house was owned by the former adviser’s son.

“The house was rented out by Siddiqui’s son on July 20,” she told reporters in Islamabad.

On the government side, de-facto information minister Firdous Ashiq Awan said Siddiqui was arrested under a law introduced by the previous PML-N government.

She said the PTI government follows a strict policy of non-intervention in the affairs of state institutions and had nothing to do with the former adviser’s arrest.

However, the PM’s special assistant on information admitted that handcuffing the veteran columnist was an unnecessary step and said the government will find out who was responsible.

It is pertinent to mention here that over the past six months, the Rawalpindi police has detained 734 suspects and registered 385 different cases for violation of the Tenancy Act under the National Action Plan (NAP).