As Israel accuse­s Omar Shakir of advoca­ting a boycot­t of the Jewish state
By AFP
Published: July 26, 2019
Tweet Email 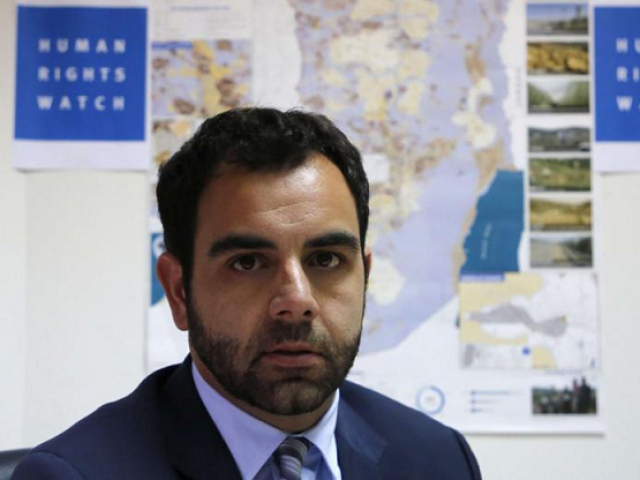 Human Rights Watch's Israel and Palestine director Omar Shakir, a US citizen, sits at his office in the occupied West Bank city of Ramallah, 2018. PHOTO: AFP

JERUSALEM: The head of Human Rights Watch has said Israel would be not be seeking to expel the organisation’s country director without US President Donald Trump in power.

Israel has been trying to expel HRW’s American director for Israel and Palestine, Omar Shakir, after accusing him of advocating a boycott of the Jewish state, a claim he denies.

“Would the Netanyahu government have tried to expel Omar without Trump in the White House? I doubt it. I think Trump has given a green light to whatever Netanyahu wants to do,” Roth said.

“You can’t appeal to Trump to promote human rights when he is so busy embracing autocrats around the world.”

The Trump administration has taken a series of steps to protect Israel from criticism at the United Nations.

He has also broken with decades of international consensus by recognising the disputed city of Jerusalem as Israel’s capital and its unilateral annexation of the Golan Heights, seized from Syria in the Six-Day War of 1967.

Previous US administrations have pushed back against controversial Israeli policies.

Roth was visiting Israel for the expected final court session for Shakir, who is appealing against his expulsion.

But the session was delayed at the last minute and is now unlikely to take place until September.

Israel says it is seeking to expel Shakir based largely on comments he made before joining HRW in which he praised the boycott, divestment and sanctions (BDS) movement, which calls for a boycott of Israel.

In 2017, Israel passed a law allowing it to expel any boycott supporter.

HRW does not advocate BDS and Roth said the attempt to expel Omar, who is of Iraqi descent, was a clear attempt to quash criticism.

“It was so clear to us when this case was brought against Omar that this had nothing to do with Omar. Omar was just an easy target because of his ethnicity, because of some of the advocacy he did back in his college days.

“If you look at what Omar has done and said the entire time he has been at HRW, it has been 100 percent HRW’s position.”

He said by trying to expel Shakir, Israel was joining a “very ugly group” of countries that harass HRW, including North Korea and Iran.

Asked whether HRW was aware of Shakir’s previous comments when it recruited him, Roth said Shakir had a right to his private beliefs.

“HRW didn’t investigate Omar the way the Israeli security services seem to have done, but it would be wrong for HRW to apply an ideological litmus test to our own employees. The only thing we insist is that once they join us they are scrupulously accurate and that they abide by HRW principles.”